Our recent journey into Northern Michigan took us into Traverse City, one of the prime cherry-growing regions of the world and home of the National Cherry Festival in July.

Of course, Traverse City has much more than this fruit to recommend it to travelers; some of our more interesting encounters are documented below: 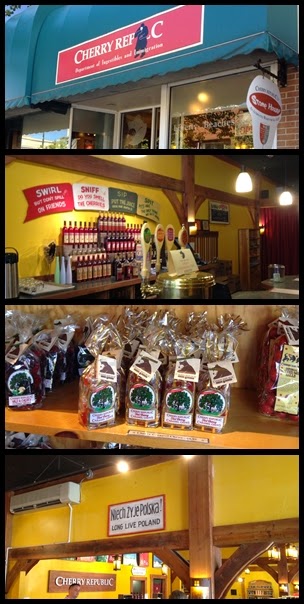 Cherry Republic: we had missed out on the peak of cherry season in Traverse City, though there were plenty of roadside stands still selling their harvest. However, all is not lost - if you want anything (and I mean anything) remotely cherry-related, you'll more than likely find it at this local institution. A place like this was a must stop for us, with my spouse being a self-proclaimed cherry-holic.

Cherry Republic has four locations spread out over Northern Michigan. Dropping by their location in downtown Traverse City, we found out that similar to a place like Costco, customers can sample an array of their products, including beverages, sweets, salsas, trail mixes and preserves. And who are we to refuse such generous circumstances.

You might be able to find specific products more cheaply at other places, but if you've got a wide and varied gift list, this is probably as good as it gets for getting all your shopping done in one fell swoop. Bonus points if you can spot their salute to the country of Poland on their store interior (apparently their country's farmers came through big time after a freak weather pattern killed off most of the state's crop in 2012.) 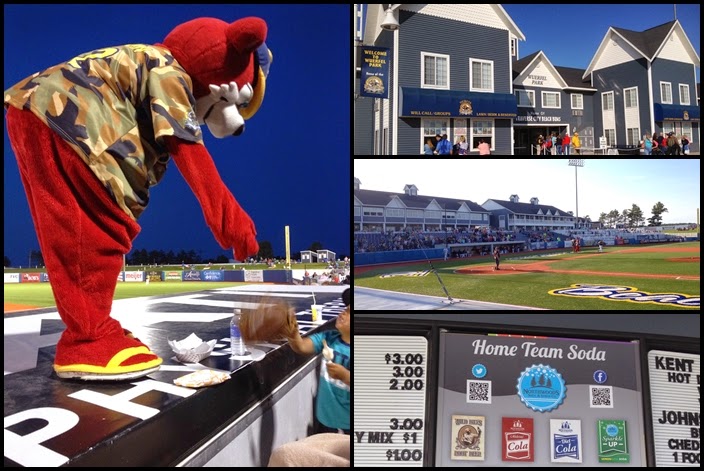 Wuerfel Park: this baseball stadium looks more like a modern-styled apartment complex or shopping mall from the outside, but the inside reveals a little gem of a ballpark. Home of the Frontier League's Traverse City Beach Bums, this stadium has varied seating options and are quite affordable (even a private suite or table will run you only $20-$25 per person if you max out the capacity.)

Likewise, food is very respectably priced and covers all the standard stadium staples. A few more unique beverage choices can be found at Wuerfel, including some Bell's Brewery craft beer and soda pop made by Grand Rapids based Northwoods.

Those attuned to baseball's major leagues will be able to see that the talent is generally a notch lower. However, this does not detract one bit from the effort and passion put out by the players as they perform on the field. Perhaps for some of these folks, dreams of getting picked up by or receiving the call back to the major leagues will be realized (almost 30 players who have played in the Frontier League have received that call in the league's 21 years of existence.)

Nor does this lessen the fun a family group or baseball fan can have at these games. We both sensed that everyone associated with the league knew that pleasing the fan was the prime directive, a refreshing change from most bigger money sports. The ultimate example of this was a player from the visiting Lake Erie Crushers (currently the only Ohio-based team in the league) handing a no longer usable bat to a boistrous (in a good way) home-team-rooting child sitting next to us. The sheer joy and thrill he expressed after receiving his prize could not help but bring a smile to your face.

2019 Update: The Beach Bums are no more; the team and stadium was sold to new owners and will now be known as the Traverse City Pit Spitters of the Northwoods League.  For more information, please check out their website. 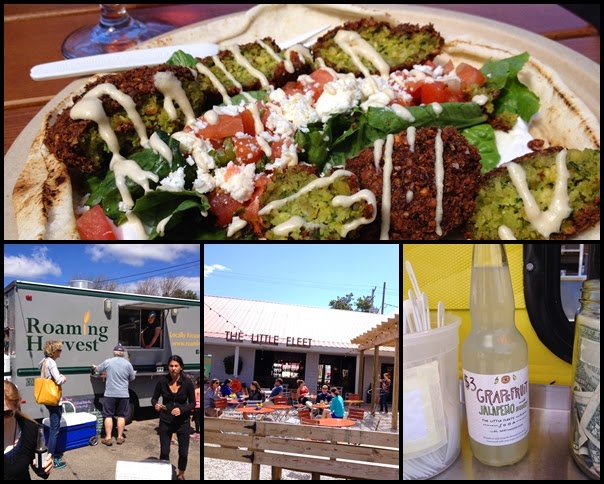 The Little Fleet: This was a completely chance find, as we headed into Traverse City with no definite lunch plans nor any real prior research as to the town's lunch options. However, we were absolutely thrilled to find something that promised a change of pace from what had been restaurants heavily weighted toward American and bar food items.

Essentially (with slight variations) Traverse City's version of Columbus' Dinin' Hall, visitors will find a parking lot anchored by The Little Fleet bar filled with eight locally-based mobile food trucks and/or trailers. Food items and non-alcoholic drinks are ordered at the individual trucks or trailers themselves. An intriguing option exclusive to this food court (which I later regretted not trying) was a specially bottled grapefruit-jalapeño soda pop.

Those who are seeking something alcoholic with their meal can order something inside the bar. My spouse and I opted for this option and found a gem in the Northern Natural Cranberry Ginger Cider. I went for the New Holland Full Circle Kolsch, which fit the bill of something lighter to go with my meal.

The spouse and I went different routes in breaking up our culinary ruts; she went with the most unconventional thing on the Anchor Station food truck's fairly conventional menu (burgers, dirty fries, and nachos) and was rewarded with a solidly made falafel sandwich. On the other hand, I went completely unconventional and ordered up the most strange sounding grilled cheese from the menu of the EZ Cheesy trailer: the Tampopo ($6), which consisted of ramen, kimchi, shaved brussel sprouts, plus melted mozzarella and cheddar on brioche. Personally, I would've preferred if the sandwich had more prominent kimchi and brussel sprout flavor profiles, but it was enough of a curveball from what I had been eating that it satisfied my taste buds in the end.

2017 Update: The Little Fleet Food Truck Court continues strongly, though EZ Cheesy may have given up the ghost based on their Facebook activity.  Updated social media information and the current food truck listings are linked below.