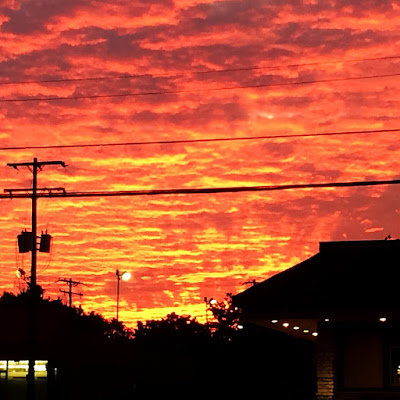 A sunset can be beautiful, even spectacular. Unless this big blue marble we reside on gets flipped off its orbit by some large celestial object, this planet's inhabitants can expect this phenomenon to occur at dusk for the foreseeable future.

Human beings might wish that sunsets on our life on this earth were equally as timely and regular. But mix in luck and circumstance with the complex organisms that we are, and we find some will live into the triple digits, and while others will find that their sun has set far too early.

There's almost always a bit of unfairness in the latter instance. It hurts even more when the person sports a larger-than-life personality and charisma that naturally draws others to them, who are genuinely nice and makes others feel better about themselves. Patrick and Joe, who left this world and my life roughly a decade apart, were two such people.

These two sported imposing physical figures. Joe, who I got to know through a running-oriented Internet forum, sported dreadlocks and a stocky, rugged physique that looked at home in his boxing matches and mixed martial arts scuffles. In contrast, these traits made him stick out precipitously when he ran with the leaner folks at the numerous running events he ran in.

Patrick, on the other hand, morphed into what some might call a stereotypical beer brewer body type, growing a flowing, long beard, solid beer gut, plus a strong infusion of country strength. The latter served him well during his early days working as an EMT dealing with unruly types.  Similar to Joe and his running, Patrick's exterior appearance probably seemed atypical when it came to a previous position teaching prospective candidates (Patrick loved to teach) the ins and outs of the nursing profession.

His smarts also served him well as a brewer - he learned lessons from his early homebrewing failures and combined that with his increasing knowledge in both brewing and microbiology to brew higher quality beers of all styles. Joe was also no slouch in the intelligence department, working as a traveling journalist in an era when hard facts still meant much more than social media likes and websites combining slanted opinions and cherry-picked factoids became more prominent.

Both knew their way around the kitchen as well as the toolbox, with Joe handling his own house renovation (the saga of the pink sink proved quite popular for those who followed his daily updates) and Patrick putting in that backyard chicken coop (and requisite fowl) he had long wanted but never could because of constant moving around. Patrick was a wonderful family man who has helped raise three terrific children; Joe was single when he passed away, but I suspect he would've been a great father as well, had he had the chance.

And perhaps unsurprisingly, they were both fans of good beer, and could hold their own in terms of hoisting a few on a given day.

Joe showed me he could befriend anyone during a working trip into San Francisco. Meeting up at Toronado Bar in the Haight (a place not too much unlike Columbus's Bob's Bar - dive atmosphere with awesome craft beer), we caught up over brews and brats we obtained from Rosamunde Sausage next door.  After a bathroom break, I caught Joe at the bar sharing laughs with that night's barkeep, a fellow who looked even more intimidating at first glance (he reminded me of Paul Teutel Sr. of the reality show American Chopper.)

Patrick and his family, on the other hand, were the first folks I met from my spouse's side of the family, during a quick visit to their campsite in the Hocking Hills. He and his family made me feel right at home, and their hospitality helped reassure me that my move to Ohio to eventually marry my spouse would go well.

Sadly, the two never had a chance against their respective ailments. Joe never woke up after falling asleep on his sunset night, the result of an undiagnosed heart ailment. For Patrick, his sunset was brought on by the type of cancer that typically ends up detected far too late to recover from. In both their cases, they were far too young (straddling either side of 40) when they died and their passing far too sudden.

In Joe's case, several of our running-circle friends traveled from all parts of the country to meet up with his family at his memorial, and later that year we paid more tribute in sweat and miles. On a spectacular day, a gaggle of us paid homage by tackling North Carolina's Outer Banks Marathon. In my case, the challenge was a bit more acute, as I had gone from close to ground zero to marathon distance in 12 weeks (not a recommended training protocol, nor something I could pull off now) but  inspiration from Joe as well as the camaraderie of friends pulled me through.

I actually used that momentum to knock out four marathons in four different states in less than a month-and-a-half, including one where I duplicated one of Joe's more unique quirks by racing in a caveman costume (although in my case, I looked more like a gaunt Tarzan than a prehistoric pedestrian.) Even after a decade, we all still remember Joe on his birthday and the day of his passing, with those still running pumping out a few miles in his honor on that day. For me, I hope to use his memory as part of a bigger package to finally knock out that tenth, and most likely, final marathon.

With Patrick being part of our family, the situation is both more acute and long-term.  The wake planned in a few days promises to be boisterous (he said he didn’t want any mopey folks at his send off) and full of emotion, but beyond that will be figuring out the new normal, providing support when and where we can with our family left behind by his untimely sunset.

As far as the blog and social media account, things will also return to a new normal as well next week. Until then, we'll be shedding a few tears, exchanging hugs, and maybe cursing a bit at how life's unfairness.

And of course, we'll be raising many toasts our best friend, who I suspect is making friends and brewing some incredible beers in the next world as I type.
Posted by Joe