All I Owe O-Hi-O: A Return to the Ohio State Fair 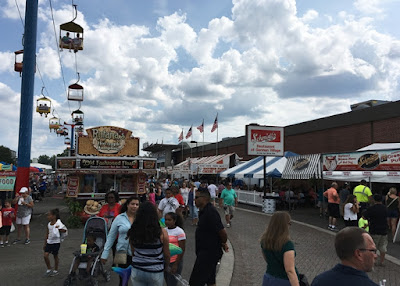 It's taken a few years, but now I think I've come to truly appreciate the entity that is the state fair.

I visited California's version of the state fair a few times both as a college student and later as young adult, but during those years my enjoyment of carnival and roller coaster style rides was waning, and the more informational exhibits weren't all that interesting to me at that time.

My first visit to the Ohio State Fair was something akin to the movie/musical "State Fair", where my spouse and I were still deeply experiencing the thrills of a young romance alongside the midway. The next couple of visits were more for the concerts, with Dolly Parton in 2016 (a fabulous show that I wrote about on this blogpost) and then comedian Gabriel Iglesias the following year.

This year, we got the full on fair experience, with a little help from some long time fair participants.

Our visit this time around was sponsored by Ohio Soybean Farmers and Ohio Soybean Council (to whom we are most definitely thankful for the opportunity), which took us on a hosted, behind-the-scenes tour of their sponsored areas prior to being let loose on the fairground to enjoy the rest of the day. I had been under the impression was that our group would completely consist of influencers, but we discovered that there were a couple of couples in our select group who actually operated farms within the state. Their insight on various issues was very helpful as we undertook our mini-tour. 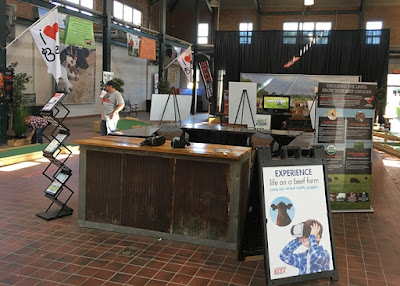 If nothing else, the tour gave us the first hint that we had nowhere near visited every place on the fairgrounds. First, we stopped by a previously never visited venue in the Voinovich Livestock & Trade Center; where Ohio's beef industry was on full feature with numerous displays, a putt-putt course (proceeds from which go to scholarships), and a virtual reality way for people to experience a beef farm. Here we got an introduction to this year's Ohio State Fair Queen, the very well-spoken Morgan McCutcheon, who expounded on the benefits the state's 4-H program has given her. 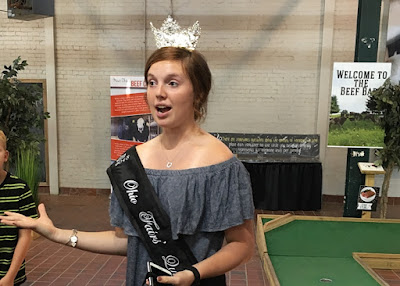 We later wandered to the back to the cattle prep area.  With this being a show weekend, the stalls were abuzz with cattle from numerous farms being escorted to and from the show area, and owners meticulously prepping their prize specimens for the judging. 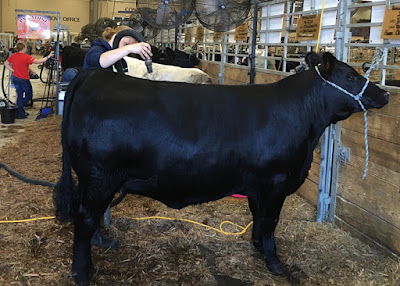 We then made the trek over to another building we had only briefly scraped on previous visits in the Donahey Ag & Hort Building.  Here, we met with a representative from the Ohio Soybean Council give the lowdown on the state's soybean industry, with a colorful pig race display (if you did not know, soybeans are a prime feed source for the state's pig farmers) that was a big hit with the younger types who came along with our group. 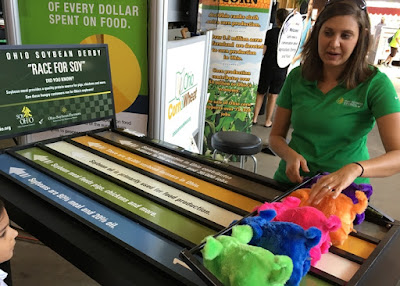 Similar to the beef building, the soybean stall had numerous statistics and displays related to their state industry. Another welcome aspect to the tour was the discussion of what have been some often controversial topics such as GMO vs. non-GMO, hormones in beef, grass-fed vs. grain-fed beef, cage-free eggs, organics, and so forth. As someone who tries to explore all sides on any issue, their perspectives were very much appreciated, and when it comes down to it, it's all related to demand.  If the consumers want it, the farmers of this state are going to do their darn best to get it out there. 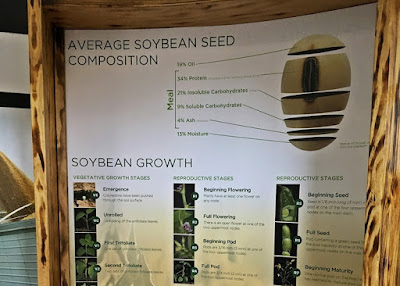 Our final tour stop (but not our only stop) was at an old favorite of ours in the Taste of Ohio Cafe, which features dishes made with a variety of agricultural products from state farmers. In the past, we always appreciated the availability of Ohio craft beer at this cafe, so it was a welcome sight to see a brand-new dedicated Ohio-focused craft beer stall inside the cafe this year. The tastiest dish we had this day, as it turned out, was our lunchtime meal, a creation that made up for its lack of picturesqueness with sheer deliciousness and wallet-friendly pricing in the Pork Loin Sandwich. 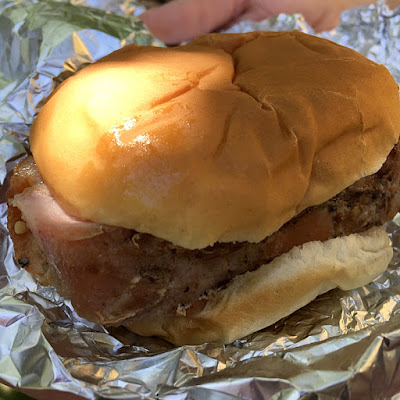 From here the group broke up, and we decided to make a full day of it with a mix of previously never visited and old favorites. With the former, there was plenty of discovering to be had, such as Dog Agility competitions (before the official start of our tour) and the previously unknown to us sport of Cowboy Mounted Shooting. Both male and female members of the Mid-Ohio Marauders impressed us with their shooting and horsemanship skills in Taft Coliseum during the afternoon. 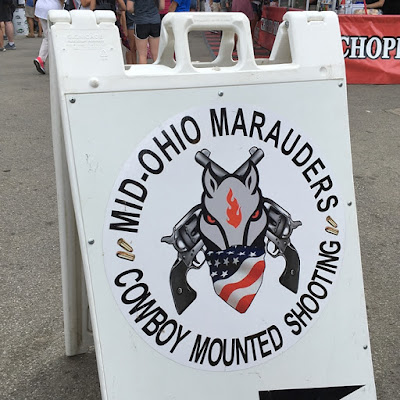 In the Department of Natural Resources area, we got another dose of the canine capabilities as a group of retrievers were put through their rounds, all with young tykes testing their luck with the fishing pole just on the periphery of the main arena.  This was followed by the entertaining display of lumberjack games, all with a big dose of corny humor, by the three performers from the Great Lakes Timber Show. 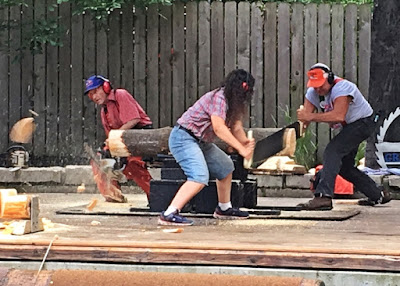 With all the advertised decadent treats from Ohio State Fair vendors, perhaps its a miracle that this was our first year of going for a full slate of fair food throughout our stay. Aside from the sandwich, we dove into a platter of Poutine Tater Tots (the melty cheese made this dish more than anything) more Taste of Ohio dishes with the Chicken and Noodles (one of the bigger food bargains we found) and a Beef Brisket Sandwich, and a Philly Donut Burger (in this case, the donut was overwhelmed by the combo of Cheesesteak and associated ingredients, bacon, AND a burger - we're guessing the regular Donut Burger probably has a better balance of sweet and savory.) 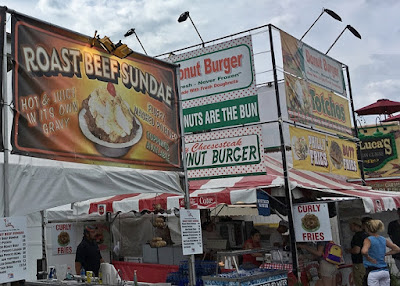 We also got in some of our favorites. The Bricker Marketplace (a great place to escape when the weather turns scorching hot) is something of a weird melange of traditional commercial vendors and informational booths for numerous Ohio government agencies, with a food court and scattering of random food, beverage, and community organization stands. At this year, you could've picked up some Tennessee-based moonshine products, a booth to get fuller eyelashes, a pound of "Mix 'Em Yerself" candies for less than $10, cowboy wear, a plethora of fidget spinners, and a pamphlet detailing Knox County's tourist charms in a 15-20 minute span. 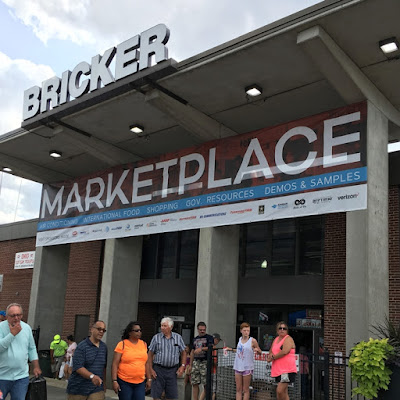 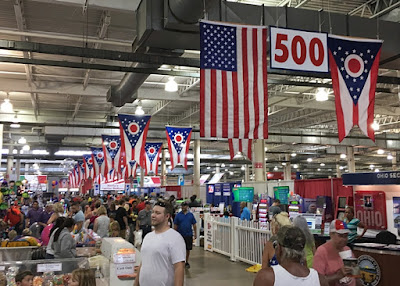 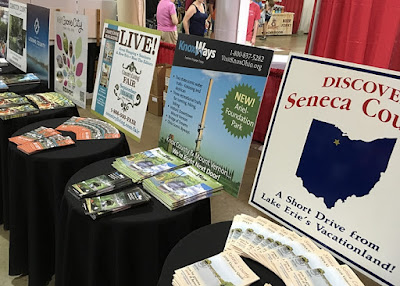 The Butter Cow and its accompanying theme (the movie "A Christmas Story") proved to be a big draw, as well as Velvet Ice Cream's specially created flavor for this year's fair in Spicy Caramel. 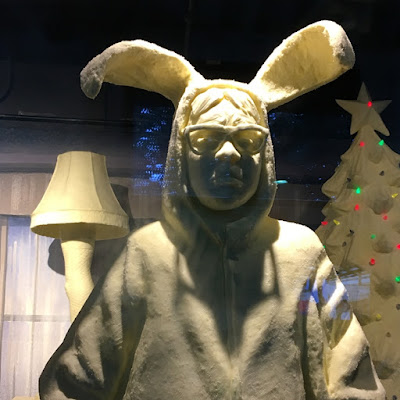 Cardinal Hall had its usual collection of traditional arts and crafts competitions with competitors from 6 to 96 or somewhere thereof. Add in the model railroad exhibit from the Central Ohio Model Railroad Club, displays from Ohio-based enterprises like Airstream and an Indy car racer from the Lexington's Mid-Ohio race track, a couple of cooking competitions, and, if you were so inclined, a chance to hear political candidates at the designated Soap Box section. 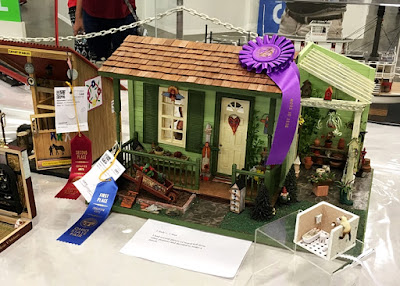 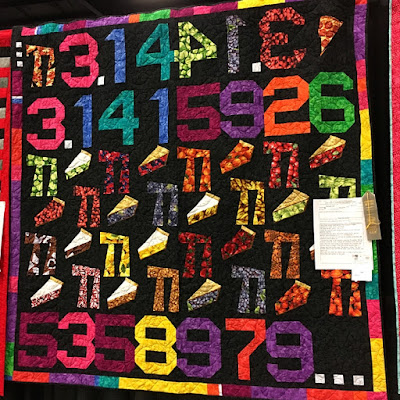 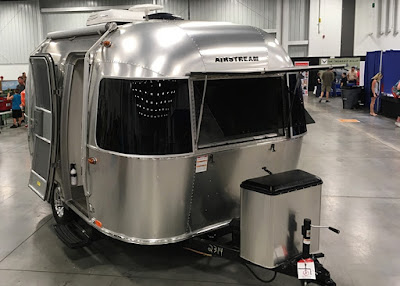 And of course, there are the thousands of fair-goers, streaming by at ground level and above on the Sky Glider

The sweet talk from the youngish dude trying to convince he folks he's lousy at guessing your age and weight (though deep down, you know he's really super good at that.)

The thrilled yelps of kids and adults alike coming from the whir and spin from familiar carnival rides along the Midway.

The constant cackle of chickens and other fowl in the Rabbit/Poultry stand on the south side of the grounds, or perhaps the whir of helicopters on the other side lifting fair-goers above the grounds and back down with metronome-like regularity.

Or perhaps the strains of horns and thump of percussion when the All-Ohio State Fair Band pounds out an assertive version of Imagine Dragons' "Believer."

All that and more can be found at the Ohio State Fair...at least for one more week.