When TourismOhio, the agency charged with enticing people to visit the Buckeye State, announced the launching of the Ohio Ice Cream Trail, I thought it was an idea that was a bit overdue. Not only is there a plethora of great ice cream in the state, and not only is there a plethora of other food-related trails in the state covering everything from beer, coffee, donuts, and wine, but they also were beaten to the punch by the folks of Hilliard, who launched their own version back in April.

Still, better late than never, as the old saying goes, and of course my curiosity was perked considering I've visited my share of ice cream places around the state during my time here.  Out of the 15 destinations listed, I have visited 11, in either the location listed in the trail promotion or a branch thereof. Well, that is, until just recently, when I made it an even dozen when I made it up to the town that has been dubbed "Flag City USA."

Findlay, the seat of Hancock County, is obviously prideful of its designation as Flag City, started when resident John B. Cooke's efforts to get this country's flag flying throughout the city in 1968 on Flag Day eventually led to a declaration in the U.S. House of Representatives in 1974 recognizing this northwest Ohio town with this unique moniker. But lest you think this is the only thing worth bragging about in this city of just over 40,000 people, the average resident will probably also name a certain purveyor of ice cream with a long local history. 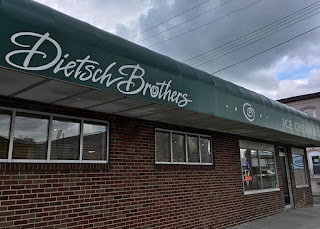 Dietsch Brothers started in 1937, when family members bought out a local bakery to sell their own chocolates and ice creams based on recipes passed from prior generations. Surviving the sugar rations of World War II, the business flourished, with an expansion into a larger shop directly across from their original location in 1956 (it is here where we made our visit) and then a second shop on Tiffin Avenue in the 1970s. 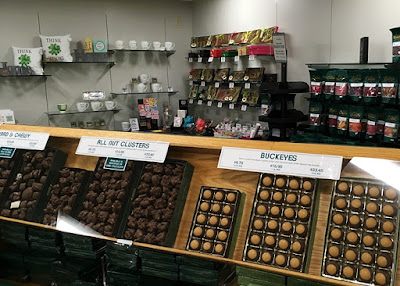 Dietsch's product line is in the same ballpark as another fellow Ohio Ice Cream Trail member that we have visited before in Zaneville's Tom's Ice Cream Bowl (which is celebrating its 70th anniversary this year) with some subtle differences.  Dietsch's offers a lot more raw space and chocolates that are made in-house (Tom's candies are sourced from Canton's longtime chocolatier Ben Heggy's); Tom's, on the other hand, offers up a more charming interior and fresh roasted nuts from Ben Heggy's as well. In either place, it's really hard not to walk out without supplementing your ice cream order with some other sweet or savory treats (we couldn't resist this temptation ourselves.) 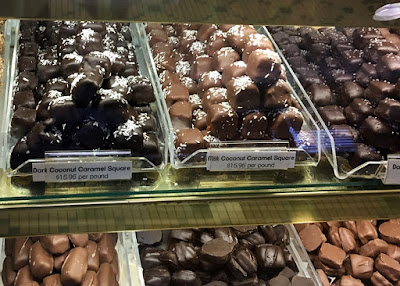 In terms of looks, the ice cream section is a little understated when compared to the chocolate section of Dietsch's. Still, all the trappings of your typical ice cream store are here with one addition I had never seen before in the form of pre-scooped dips, which I imagine comes in handy when you're planning a childrens' party and/or pressed for time. 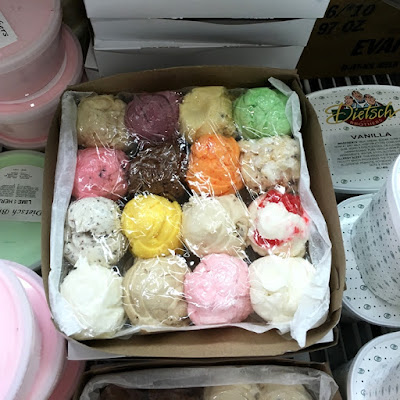 A certain truism I believe is applicable to deep-roots, homegrown places like Dietsch's, whether they are on the Ohio Ice Cream Trail or not - the locals will always hold a special place in their heart for them. Perhaps the best example found inside this Findlay institution was a framed letter to the editor from the local newspaper commenting on a robbery that took place at Dietsch's several decades ago.  The letter writer asserted that perhaps the greatest punishment the judge could lay on the perpetrator was not to jail him or her but rather hand down a lifetime ban on ever sampling Dietsch's wonderful sweet treats. 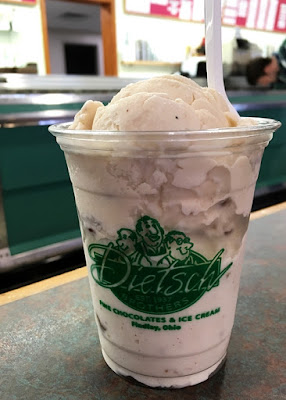