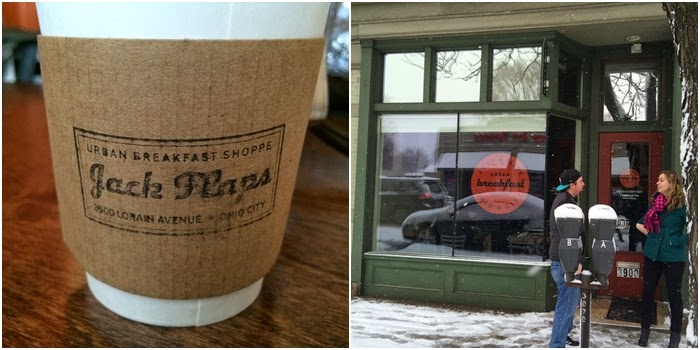 Driving around Cleveland's Ohio City neighborhood reminds me a bit of roaming around San Francisco's cross-bay neighbor, Oakland. There's a little bit of artist enclave (Jingletown) mixed in with a bit more fancy (Rockridge) and everything in between (Fruitvale and West Oakland.) To be truthful, though, Ohio City is its own unique district with its own distinct personality, a place that is now on the radarscope for visitors to the area, with its well-known attractions like the West Side Market, Mitchell's Ice Cream and Great Lakes Brewery. The neighborhood also is attracting new residents: Ohio City was only one three Cleveland neighborhoods to add population in the past ten years, according to Ohio City's own website.

Cleveland overall is also the home to an increasingly prominent food scene, and Ohio City has its own collection of worthy eateries. On a recent trip up to the area, we stopped by the neighborhood and scoped out what turned a terrific combination of tasty food and fun atmosphere in Jack Flaps.

Opening of December of 2013 in the former space of quirky but well-received chili purveyor Palookaville, Jack Flaps is a collaborative effort between Chef Eric Williams and Randy Carter, both of whom are involved in the popular modern Mexican restaurant Momocho.

After spending time trying to find a legal parking spot for our car (we luckily landed one on the street close to their entrance; note that parking spaces along the main street are limited to one hour) we walked in at what turned out to be a good time and were seated pretty quickly. It was no surprise with the hip atmosphere that most of the diners looked to be twenty-somethings; however, we never felt out of place, and the service was incredibly friendly and welcoming. An additional welcoming feature was the photo artwork of faces in various stages of egg splatter; the captured facial expressions couldn't help but bring a smile to our faces.

We started off with their house-brewed coffee (they source beans from local roasters City Roast) and decided that, with a name like Jack Flaps, one of us had to try their pancakes. Their Candy Jalapeño Jack Flaps ($9.50) sported just a hint of those mildly-heat laden peppers and an overall slightly cakey texture, something which we both really enjoyed. What made this dish pop was a special bourbon caramel sauce that they had just for that day; we had to take it home along with our leftover pancake.

I had wanted to try their Carrot Cake Waffle but alas, they were out of this item, so I went with the Currantly Winter version that we ended up quite enjoying as well. This buckwheat-battered waffle was light and airy, with a tangy currant-gooseberry compote with chunks of snickerdoodle crunch to add some texture contrast.

We added a couple sides to our order: their Vietnamese-style Sausage Patties ($3) were on the skinny side but sported a good flavor with what seemed to be a hint of cinnamon, vaguely reminiscent to the flavor of a Vietnamese chả quế. Kimchi may be coming something of a trend, and Jack Flaps' version ($1) was really one of the more funky-fermented-tangy versions we've had; it's a definite order again candidate on a return visit.

Jack Flaps' smaller space will lead to backups at time in the natural course of things (there was a bit of a queue waiting for a table by the time we left.) However, this is but a small detracting factor that should not prevent you from dropping by this eatery to sample their uniquely fun atmosphere and scrumptious offerings.
.
Jack Flaps
​3900 Lorain Avenue (Ohio City)
Cleveland, OH 44113
(216) 961-5199​
Facebook    Instagram     Twitter    Website
Posted by Joe