This final food-oriented post on our 2014 California travels covers one of San Francisco's newer mobile food bastions, a rather unlike place to find some great coffee, and a nice little take on the West Coast style IPA by a brewer in California's capital city.

SoMa Streat Food Park: Driving through San Francisco on our last trip to California, my spouse and I had a "Empire Strikes Back" moment. In that classic movie, there is a scene where Han Solo and his Rebel crew escape pursuing Imperial ships by pretending to attack a Star Destroyer as a guise for latching his ship, the Millennium Falcon, to the bottom of the Destroyer. The Imperial Fleet loses track of the ship and decide that the Falcon has jumped to hyperspace. Before the fleet itself jumps to hyperspace, they perform a standard Imperial procedure by dumping their garbage into space.

Ah, but Han Solo knows this, so as the trash is dumped out, he simply unlatches his ship and floats away with the garbage until all Imperial Fleet ships have jumped to hyperspace. However, he needs to find a place where they can shelter down as well as fix the creaky hyperdrive engine and scans the computer maps for something nearby.

For us, the conversation went similarly:

San Francisco's SoMa (as in the South of Market neighborhood) Streat Food Park, nestled between the US 101 freeway and the local Costco, was in development prior to my departure to Ohio. I had always wanted to drop by to see the finished product, especially to compare it to other versions I had encountered like Columbus' Dinin' Hall and Traverse City's The Little Fleet (my blogpost on the latter can be found here.) My spouse and I found that the Streat Food Park offers a bit of an oasis from the surrounding concrete jungle, offering arcade-style games, the "Streat Brew" beverage truck with wine, beer & other mixed drinks, and a covered main seating area with televisions and patio tables to complement the rotating collection of food trucks.

The food trucks here include some of the more regionally famous mobile vendors (Chairman Bao, Señor Sisig, Little Green Cyclo and Roli Roti, to name a few) as well as trucks with some unique food focuses (from the Irish-Eritrean(!) menu of EireTrea to Chef Pelle's Nordic Scandinavian specialties to Sugar and Spun's natural and organic (?!) cotton candy.)

None of the big-name or truly unique vendors seemed to be around during the time of our visit, so we took a shot with what sounded appetizing at that time and ended up with some decent eats. My spouse's fish tacos from the Peruvian oriented El Calamar were nothing eye-popping taste-wise, but did serve as solid belly fillers.

Meanwhile, I went with the Haitian-oriented Caribbean Spices truck and their Kongo Jerk Sliders, a mix of Haitian pikliz with jerk chicken between plantain patties. The slider did not quite really hold up as such and I had a much easier time mixing everything together as a plate lunch. I wouldn't have minded a little more kick from both the jerk and the pikliz (which uses the notoriously capsaicin-laden Scotch bonnet pepper in its preparation), but otherwise it made for a decent lunch.


Mountain Grounds: While boasting the distinction of being legendary New York Yankees slugger Joe DiMaggio's birthplace, as well as being home to the National Historic Site dedicated to famed author and naturalist John Muir, the small East Bay town of Martinez, California does not normally come to the top of the area's destination places. However, if you do find yourself near here, a tasty reason to visit can be found in an otherwise unremarkable strip mall on the outskirts of town.

My initial visit to the Mountain Grounds coffee shop a couple years ago was a couple months after their initial opening in September 2013. It was something of a take-a-chance stab at some good coffee in an area dominated by chain coffee places such as Starbucks and Peet's. The owners indeed had an interesting history, pulling roots from Montana to setup shop in this normally very quiet county seat of Contra Costa County. The coffee beans sourced are also roasted and shipped from a longtime friend located in Montana.

The lattes I received that day were about the best we had during that whole visit to California. As it turned out, others have noticed the quality of the beans used at this coffee shop: Coffee Review placed the Guatemala Acatenango Gesha beans sourced by Mountain Roasters in the Top 30 Coffees of 2013 and the second highest in the state of California for that year. Since then, they have joined the nitro-charged iced coffee trend (before Starbucks and local-purveyor Crimson Cup brought out their beer-oriented versions), added a way to beat the California heat with a myriad of Starbucks-styled coffee concoctions and a more straightforward espresso over ice cream, and have integrated themselves within the local community. 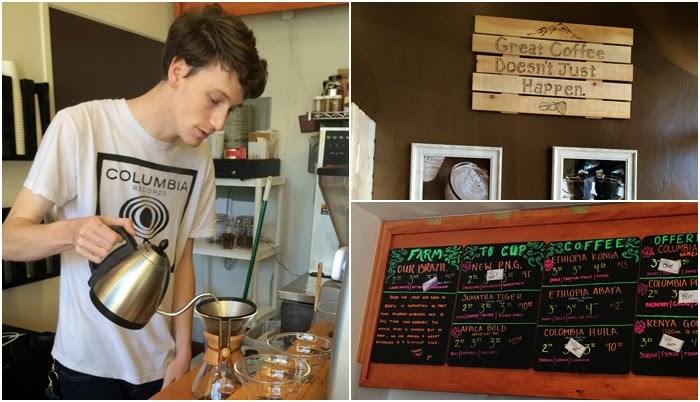 My return trip to this coffee house showed me a much more bustling place than my previous visit, especially considering it was a lazy between-holidays Sunday morning. Mountain Grounds has added basic cafe-styled food items to their menu (including bagels, muffins and paninis) as well as other non-coffee beverages like chai and cider. And yes, the coffee was quite good again.

Martinez, California and the state of Montana: not two areas you would think of the source of great coffee, but Mountain Grounds is doing a pretty good job of changing that perception. 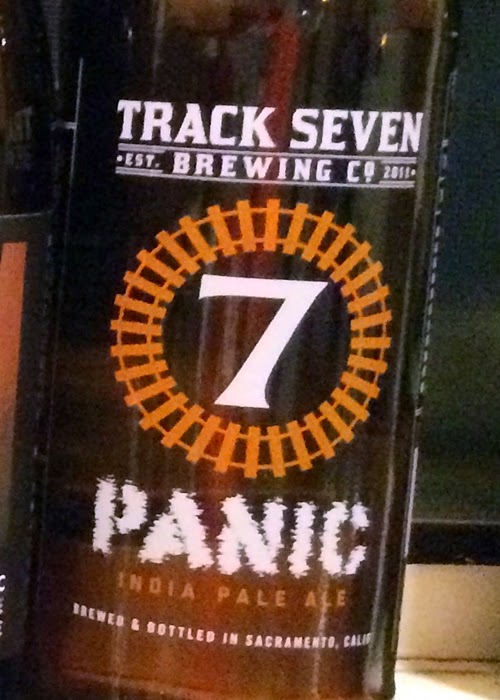 Track 7 Brewing Company: We "accidentally" ended up with a bomber of this Sacramento-area brewer' Panic IPA during a trip to grab some non-Ohio-distributed brews for our trip back home. It was definitely not on our list of must-gets initially, but was recommended to us by a store clerk after we pulled a couple bottles of Russian River Brewing's Pliny the Elder for our stash. According to him, this beer took "Best of Show" at the California State Fair Craft Brew Competition in June 2014, besting entries from more well-known breweries such as Stone and Firestone Walker.

I am not the biggest IPA fan, but Panic was an IPA that I very much enjoyed. It started off with that West-Coast style taste profile with hints of grapefruit and pine, but finished with a uniquely and pleasant grassy, bready taste. Even my spouse, who is much more of the hop-head/more IBUs, the tastier gal, could appreciate this very well-balanced brew.

Track 7 Brewery's newest production facility, which began construction in 2014, is slated for its official grand opening festivities on February 21, just in time for the upcoming Sacramento Beer Week, slated to start one week later on February 27.