Like many others, doodling was a constant companion throughout my years as a student. My doodling subjects depended a lot on my whims at the time, but something I would always come back to was letter fonts. Whether it was hand re-creating those that I saw and liked (Prince's "Purple Rain" album font was a favorite) or trying to design a personalized font I could call my own, I could at least pass myself off as looking engaged with the class lesson of the day.

Once I had moved to Columbus, I occasionally spied some gloriously old-time fonts and graphics on what appeared to be letterpress produced media on signs and products for sale at local businesses such as German Village's Pistacia Vera, Easton-located Celebrate Local and Worthington's Sassafras Bakery, among others. Eventually I figured out they were produced by a company in Worthington with a rather colorful name and an interesting story behind it.

Igloo Letterpress was founded by owner Allison Chapman in her home back in Minnesota in 1996. When her husband landed a job in the Columbus area and they made their subsequent relocation to Ohio, Chapman found that relocating her letterpress business was something of a challenge. She needed a building that not only had enough space to handle their large work tables and drawers of type, but also handle her over 13,000 pounds of letterpress equipment, including her grandfather's 1892 clamshell press.

Eventually the building in Olde Worthington that would become their current location came available, and Igloo formally opened their doors here in 2009. Since then, the business has continued to prosper, garnering raves from their clients and customers as well as well-earned recognition for the business and Chapman herself, including her inclusion as one of the Eight Badass Columbus Female Founders You Should Know by Amy Taylor of writehuman.com. 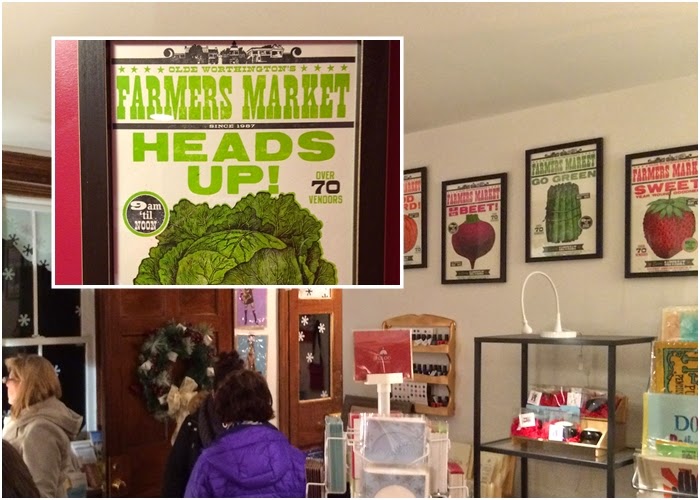 The Igloo Letterpress property covers two buildings. The Snow House, acquired by Igloo and re-opened as their gift shop in September 2013, contains all manner of Igloo Letterpress' retail products as well as a collection of arts and crafts from numerous local artisans. Often time my spouse and I have simply dropped by to browse through the shop, especially in concert with a visit to the Worthington Farmers Market; almost everything within these walls has a high level of visual pull. In a way, it's like window shopping without a window between you and your eyes.

But even more satisfying is in the purchasing, especially anything that has been run through their letter press or book binding machines. For example, the tactile feel of the indented letters and graphics, the simple yet clever greetings, bright vibrant designs and colors and bold typeface fonts that are characteristic of Igloo's greeting cards (which cover just about every occasion you care to imagine) make their mass-produced competition sterile and lifeless by comparison. 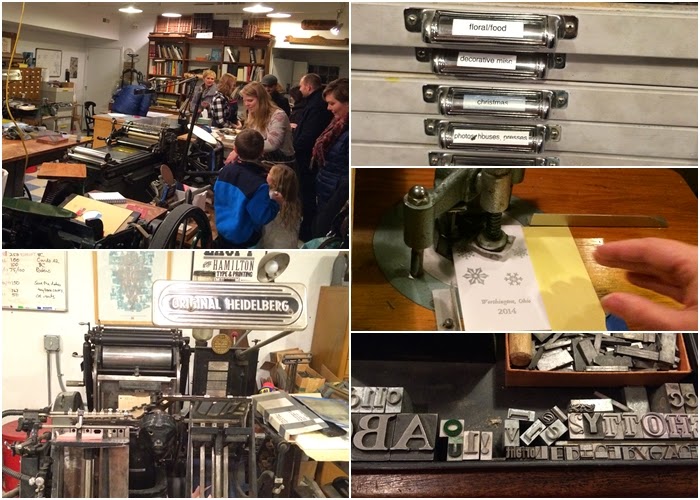 I believe you even gain more appreciation of their finished products when you venture inside Igloo's main production building. Cozily charming on the outside, the building interior has a certain chaotic organization that you better appreciate as you watch the employees perform their duties. Everything is hand-produced here at Igloo. From the whir and clank of the presses, to the sight and scent of vibrant inks, the concentration of employees in aligning and arranging the various graphic media, and then surveying their newly printed materials on the side as they dry and await finalization: the whole process is an homage to art form which has now been concentrated around the country into a few select bastions of creativity.

Even better, anyone can participate in this process, via one of their drop-in Saturday Farmers Market or holiday-oriented workshops or scheduled classes, some of which can handle even the younger tykes of this world. Last year's Valentine's Day (a similar event was held just this last weekend) and Christmas-oriented drop-in workshops that my spouse and I participated in proved to be incredibly fun, hands-on experiences. The Valentine's Day workshop especially was a uniquely satisfying tactile experience for me, feeling the weight of the type in my hands and arranging it alongside the graphics blocks such that it not only it actually could run through the press (hint: sharp angles generally do not work so well) but produce a little piece of art of which the creator could be tremendously proud.

Igloo letterpress is a gem of a business that seems destined to keep their tried-and-true machines and and age-honed printing methods and processes running for many more years to come in the Central Ohio region.

Update: Things are indeed going well for Igloo Letterpress!  Just today, they announced on their Facebook feed they are moving to a larger space just up the block in from where they currently operate in downtown Worthington.