Our California travels during the holidays, unlike other visits in the past, were marked by days or half-day trips instead of extended multi-day affairs. One of these excursions was marked with a quick road trip along Highway 12 into Sonoma, where we dropped by an old favorite, absorbed a little California history, and did a little wine tasting along the way.

Fremont Diner - this roadside diner had been formerly the home of a long-standing roadside dive Babe's Burgers and Franks, which had a reputation for good burgers. After Babe's closed, over a year passed before the building was remade and reopened in mid-2009 by owner Chad Harris. Despite the cramped (though nicely nostalgically-decorated) interior space and window-only service, diners started to flock here as word spread the delicious Southern-styled eats being created here using locally sourced food purveyors.

I myself had been a frequent visitor of the diner while I was still residing in the Bay Area, and my spouse got the pleasure of tasting their wares on our first year dating anniversary trip out to California in 2011. Our last year's Christmas-time trip to California was our first chance for a revisit since then.

Exterior changes were the first thing that caught my eye on this return back to the diner. The hand-painted clumsy-in-a-charming way original Fremont Diner sign had been relegated to the back of the property. Even when this sign was up front, the restaurant was (and still is) easy to drive past if you aren't sure what to look for.

In addition, the outdoor grassy area with picnic tables next to the restaurant with had been enclosed, providing a shelter from inclement weather or extreme temperatures. With indoor seating packed as usual and cold temperatures (by California standards) that morning, it was a welcome sight this morning. This enclosed space had some additional neat features, including a natty Sonoma-oriented mural and play things for the kids (I spied two buckets of Mr. Potato-Head toys, amongst other items.)

Another welcome change was the switch to table service, which is a fairly recent change from the order at the window queue I was used to going through every time I dropped by for a visit. Being a bit chilly in the outdoor seating, we immediately ordered a pot of French Press coffee; the diner uses the roasts of San Francisco-based Four Barrel Coffee. 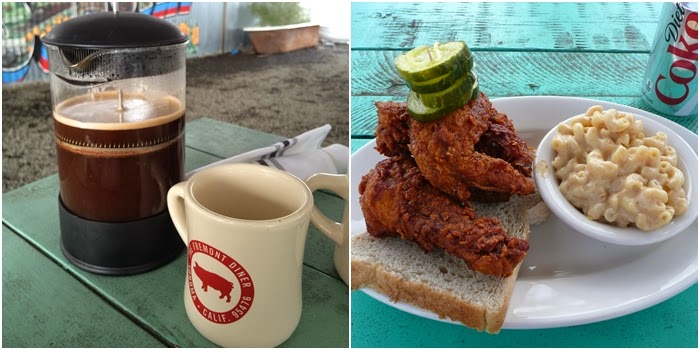 While there are many delicious things to sample here at Fremont, my personal leanings are toward their Nashville-style chicken (yes, take note all you Hot Chicken Takeover fans who might be heading to the Bay Area soon) and anything involving pork. No chance for fried chicken this early in the morning (we did find an archival photo of their finger-licking version of this dish from a previous visit, as seen above), but we found some acceptably delectable substitutes in the Black Pepper Brisket Hash ($10.99) and their take on Chilaquiles ($11.99). The spouse was taken aback at first at not getting a corned beef flavor profile, but got in tune with the smoky profile of the brisket in her hash. The addition of pickled onions in my chilaquiles add both a bit of color and extra zing to Fremont Diner's otherwise solid take on this Mexican classic.

The Fremont Diner has a whole lot more to choose from, including craft ciders and beers, desserts (including butterscotch pudding and lemon chess meringue pie slices) and the recent addition of barbecue dinners spring of 2014. Perhaps the best advice if you decide to stop by is bring an appetite and/or bring a lot of friends: there's a lot of good stuff to be found in Fremont Diner's seasonally-oriented menus, and there is no real mystery why this place remains a favorite destination for many.


Mission San Francisco Solano - there is no doubting the influence that Spanish settlers had in many areas throughout the Americas, and California was an area where that influence was profound. Much of this influence was brought on by those of the Catholic faith: from the mid-1700s all the way to statehood in 1859, representatives from the Franciscan Order, led by Father Junipero Serra, setup missions throughout the state with the idea to colonize the area as well as bring Christianity to the native peoples.

This Spanish colonization had consequences both positive (mainly via introduction into California of modern agricultural technology and European vegetables, fruits and horses) and negative (particularly in relation to the decline and decimation of Native populations from exposure to diseases and the attempts to turn and keep individuals into Christianity.) An inexpensive way to dive into this chapter of California history lies in a visit to one of these sites.

Mission San Francisco Solano in Sonoma, operated by California State Parks and part of the Sonoma State Historic Park, is the northernmost and last established (construction began in 1823) outpost along what became known as El Camino Real (translation: The Royal Highway). This road connected the 21 missions of what was then Alta California as well as assorted military presidios and pueblas such that a traveler could make it between outposts with one day's travel.

The only mission established while an independent Mexico ruled the region, Mission Solano San Francisco operated as such for only 11 years before it was officially closed in 1834. From there, the building underwent numerous ownership transfers and uses as well as increasing neglect until the property was bought by the California Landmarks League in 1903. Restoration efforts began several years after this purchase before the full transfer of the property to the state of California took place in 1926. 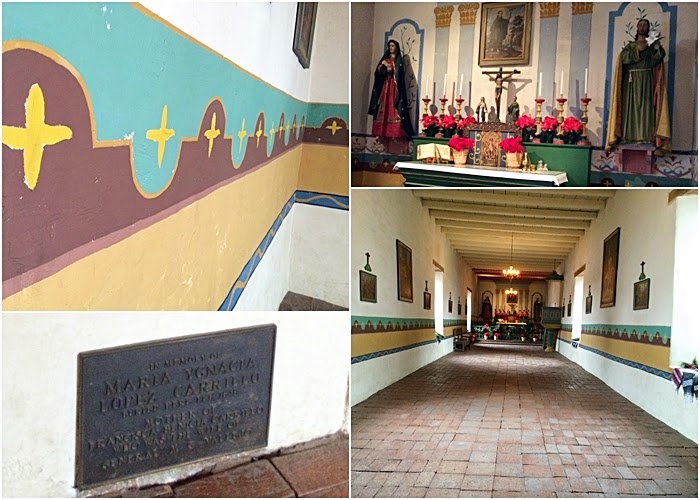 Admission to the Mission property will get you into several sites which now make up the Sonoma Historic Sites Park, including the Military Barracks and nearby Casa Grande Servants Quarters, the Toscano Hotel, and two homes associated with General Mariano Guadalupe Vallejo, who was influential in the military, business and political realm in the years just before, during after the Mexican-American War as well as the subsequent statehood of California.

The Mission and associated Sonoma Historic Sites Park is open 365 days a year except on Thanksgiving, Christmas and New Year's Day.

Adobe Road Winery - I have a confession here to divulge: for all the years of residing next door to the most famous of the Bay Area's wine countries, I really was not much into wine tasting or drinking. My spouse and I have visited wineries since we've been together, but they never have been approached as enthusiastically as our pursuit of breweries.

Not that this visit to Adobe Road, located in the heart of Downtown Sonoma will change this tendency, but this was perhaps my first wine tasting where there was not a blah wine in the bunch. This was also a wine tasting that will guarantee a return visit at some point.for us.

This winery tasting room (the main winery is located in Petaluma), located on the main plaza in downtown Sonoma, is part of the boutique wine hobby/business of Kevin and Debra Buckler. Their prime business lies in auto racing, started in 1992 with the founding of their The Racing Group (TRG) race team (they now race under the banner of TRG-Aston Martin.) The Bucklers' have been quite successful at this prime venture, concentrating mainly on the Gran Turismo (GT) racing circuit with a brief dalliance with the NASCAR circuit in the late 2000s.

Their winery, started a few years after the founding of the racing team, has both received the same level of passion from the Bucklers and seen its own measure of success with highly-rated wines and various awards. On this visit, we had only been intending to grab a bottle of their old vine Zinfandel for my father-in-law, who had been wowed by it on a previous visit to the area. But as we got closer, we began to start thinking to ourselves, "Well, we're here...why not taste what they have?

Adobe Road Winery offers a standard tasting on weekdays of $15 and a tasting of their reserve wines on weekends for $25; both those fees are waived if you decide to purchase some wine. Our visit this day came with two bonuses, the first in the form of our host. Alec was a wonderful host, engaging in both his humor as well as his knowledge of the winery and the wines we were sampling. Our second bonus came in the day we visited: since we came on a Monday, we found out that the there were leftover wines from the premium tasting from the weekend. Since the wines would simply be tossed out due to oxidation, we were able to sample their entire available collection.

At the end of our wine tasting, my spouse and I agreed we could have been happy purchasing ANY of the bottles of wine they had for sale. Our fortune to sample the premium wines worked out for both us and Adobe Road, as we walked out with a bottle of their delicious Cabernet Franc along with the requested old vine Zinfandel for my father-in-law. This Cab Franc will definitely be a wine we save for a very special occasion.