Hitting the Grounds on Indianola: Yeah, Me Too

For all the traffic that travels the Indianola Avenue/Summit Street corridor to and from the Downtown Columbus core, places to grab a cup of coffee are somewhat scarce.  Yeah, a couple of United Dairy Farmers (I personally have not had their coffee) and other random convenience stores lie along the route to do a quick grab-and-go, if you're so inclined.

A number of food establishments, from the diner level (Wildflower and George's Beechwold Cafe) to more formal dine-in type places (Baba's, with their coffee brewed with the excellent Thunderkiss Roasters, and The Crest Gastropub, although there coffee isn't highlighted much) also exist. However, for the person simply traveling through, merely grabbing a cup of coffee at these places isn't really an option.

That leaves some interesting three-pack of contenders for that potential cup of joe. Number one is pretty straightforward: Portia's, one of the first area restaurants to concentrate exclusively on Vegan dishes, now offers up a breakfast option with their Next Door Cafe, opened up, well, next door to their original restaurant on Indianola. Here, one can grab a cup of coffee brewed with Crimson Cup beans and, if one chooses, a bevy of breakfast food items.

Number two is might actually be the most interesting of the three, but really isn't a practical option unless cats are forefront on your mind. The main draw for Eat Purr Love Cat Cafe is not the java but the felines themselves: appointment fees to visit the store's cats and cafe sales go toward the nonprofit Columbus Humane, a nonprofit geared toward aiding animals in need. 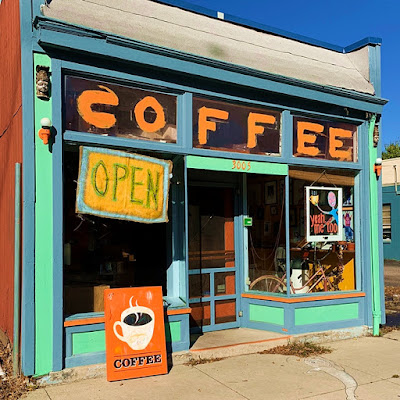 The coffee beans Eat Purr Love uses for its coffee leads us to the third of this trifecta, to a place which has ties to the mini-wave of coffee-oriented places that sprung up around the 1990s in the city and packs its own fascinating history.

When it comes to what remains of the city’s historic (and I use this term loosely) coffee scene, most would point to Stauf’s and Crimson Cup, which both arrived on the scene here in 1988 and 1991, respectively. Some of those folks may also realize that Cup O’ Joe has roots to the 1990s as well (Stauf’s acquired and merged with their then competitor in 1999.)

Those who know coffee may also be familiar with Oakland, California-based Sweet Maria’s, one of the leading suppliers of beans and equipment for coffee home roasters. What some may not know is that owner Tom Owen got his start here on East Second Avenue and High Street in 1997 for a couple years before making the move out West.

Interestingly enough, well before I knew this factoid, I myself had purchased a Porlex Manual Coffee Grinder through Sweet Maria’s, which I ended up transporting with back to Columbus on my move out here. It did a fine job of grinding coffee beans for our French Press for quite awhile until we finally purchased a Baratza bean grinder and passed the Porlex on to a friend in need.

If you mention the name Jovan Karcic, Columbus residents knowledgeable on the local music scene will know him for his ties to that scene dating back to the 1990s, a career that continues onward to this day (this January 2019 article from Joel Oliphint for Columbus Alive does a fine job of detailing this history and his latest efforts.)

As it turns out, Karcic also has ties to Columbus’s past coffee history, specifically to Owens and Sweet Maria’s (he worked with Owens both in Columbus and after the move to the West Coast for a couple years before returning.) In fact, his cafe, Yeah, Me Too, holds the original roaster used back during Sweet Maria’s time here in Columbus. 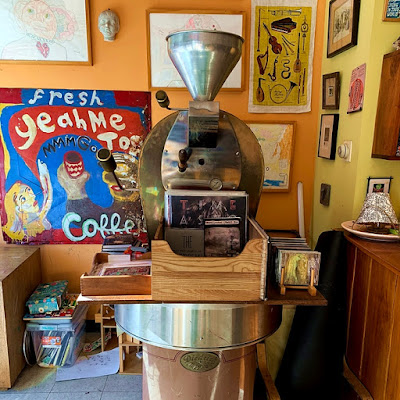 Yeah, Me Too (named for an album from Gaunt, one of Karcic’s previous bands) can be easy to miss in its little strip mall section near the corner of Weber and Indianola. And even though it has been operating since the mid-2000s, this spot might remain one of the least known of Columbus’s coffee destinations. Its operating hours (generally, 9 AM - 3 PM Mondays thru Saturdays) have made it somewhat difficult for us personally to get to. But I was reminded on a recent visit about why I’ve thought of this place as perhaps the purest coffee experience in town.

You won’t get espresso drinks here. You don’t get your name scribbled and possibly misspelled on a cup with professionally designed graphics. You don't get loads of baristas of any demeanor, nor do you have the space to plop into a chair and tap-tap-tap away on a mobile device or laptop. Credit cards or fancy phone apps to e-pay for your order aren't an option (in other words, bring cash.)

If you absolutely, positively need that in your life from a coffee place, you won't like Yeah, Me Too.

What you do get is artwork from local artists and Karcic himself dotting the walls, along with a few stray empty jute bags that once held raw coffee beans ready for roasting. On this day, a half-filled box of vinyl albums and CD's stood guard over the Sweet Maria’s roaster.

And you get the coffee basics. Bags of beans, freshly roasted (a select few were available on this visit.} And strongly but perfectly brewed French Press-style coffee. You can get it either iced or hot, and in three different sizes. Cream? Yep, that’s available too, if you want/need it (I like a tiny bit in my iced coffee generally.)

It's perfectly delicious coffee too. It also reminded me yeah, I need to visit Yeah, Me Too more often.