Charleston Choosing: Fort Nights and a Mart of Ill-Repute

"First light
just roll your window down
And smell the salty air
perfume of Charleston Town
I'm a stranger here, no one you would know
My ship has not come in but I keep hoping though
And I keep looking past, the sun that sets above
Saying to myself, goodnight America"
Mary Chapin Carpenter - "Goodnight America"

Just as my spouse and I passed the picturesque houses "Rainbow Row" in Charleston (the state's oldest city, being founded in 1670) I spied a sign outside what looked to be the Old Exchange and Provost Dungeon with the bold claim that the structure was the most historic building in this harbor town.

We did not stop by the dungeon on this trip, so I have no way to verify whether or not this statement is remotely true. But there's plenty of history to be had in Charleston, and we decided to get a dose of the familiar and the not-quite-as-familiar, as well as a serious delving into at the grim reality which was largely responsible for the pretty exterior facade that typifies the downtown area. 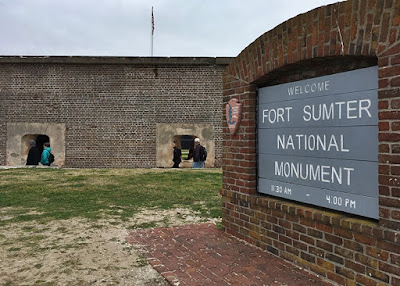 First, we hit the familiar in Fort Sumter, which most people know as the place where this country's devastating Civil War essentially started (in fact, those first shots launched at this fort happened exactly 157 years from the date of this blog post.) Launching from Patriots Point, one of the two points from which you can visit the fort (and houses the historic carrier USS Yorktown and other military-oriented exhibits and displays), we found the boat ride offers a panoramic and verbal orientation around and within Charleston harbor during the roughly 30 minute ride to the fort. 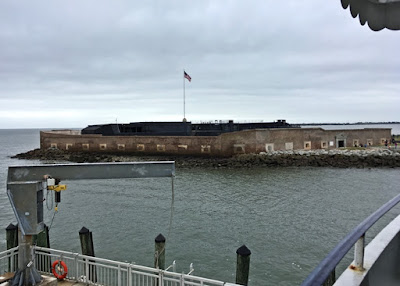 The most striking thing we found our boat reached the dock was how really small and squat the fort appeared to be. Later, we discovered that the fort was actually never finished (construction started in 1829) before those first shots were fired, and that Federal forces felt the fort was more defensible than other military facilities in the area (more on that to follow.)  Despite the relatively short time you got to roam the grounds (you spend about the same on the boat as you do at the fort (one hour) on your basic $30 ticket), there's plenty to learn about not only its role in the Civil War but in its development as a coastal defense facility until its decommissioning in 1948. 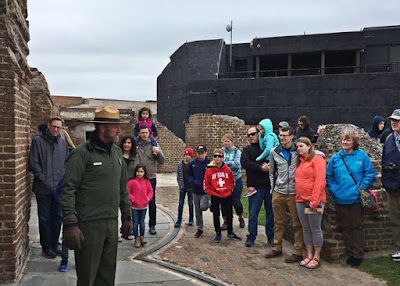 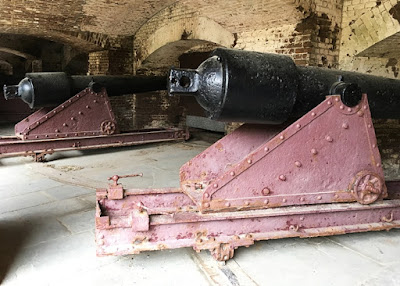 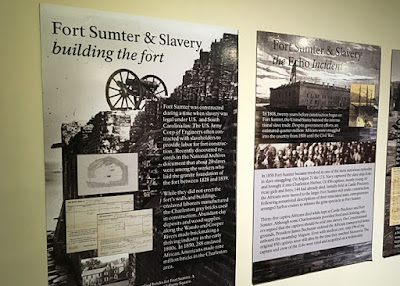 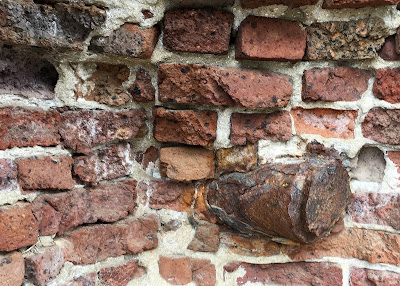 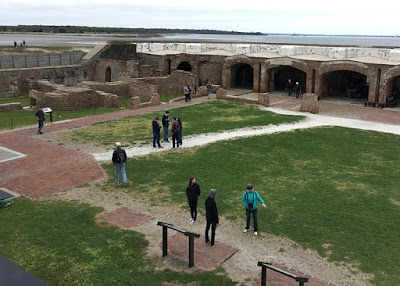 After visiting Fort Sumter, we traveled a couple dozen minutes to the south from Patriots Point to visit Sullivan Island and the even more history-strewn Fort Moultrie, which is also considered part of the Fort Sumter National Monument. 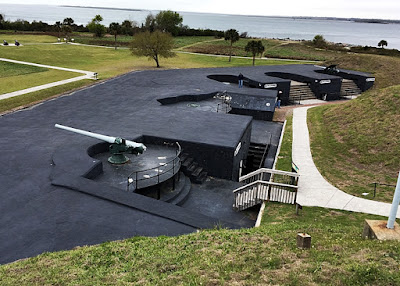 In many ways, Fort Moultrie, the installation the federal government ending up abandoning to take up the more defensible position at Sumter is the more bang-for-your-buck facility. For a mere $3 admission, you get history that has roots all the way back to the Revolutionary War, including the inspiration for the state flag design. 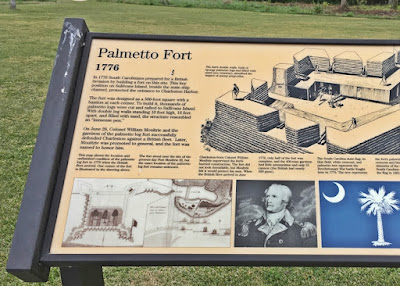 As the story goes, then-named Fort Sullivan, commanded by Col. William Moultrie, repulsed a British warship attack several days before the Declaration of Independence was signed, largely in part to the fort's walls, which were constructed out of Palmetto trees.The spongy nature of the wood helped absorb the British artillery fire; in some cases, cannonballs merely bounced off the wall; the clash was the prime impetus behind the design of the South Carolina state flag.

As you learn at the Visitors Center, the fort essentially has been divided into quarters, with each section reflecting how the fort would have looked during particular time frames (pre-Civil War, World War I, etc.) This allows for a lot of exploration through numerous passages and stairways that lead to the communications units and artillery/armament stores as well as the grass-filled spaces on the outside. 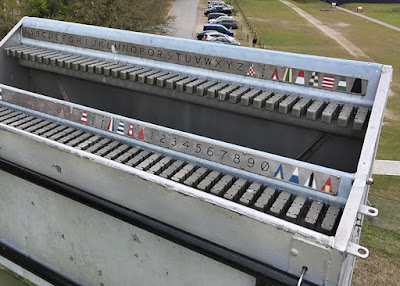 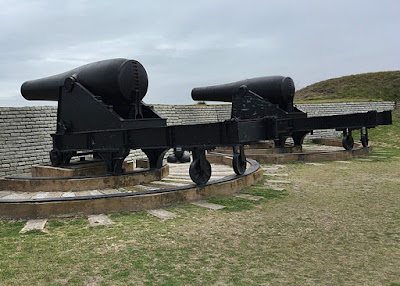 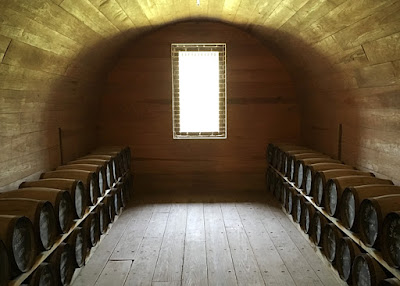 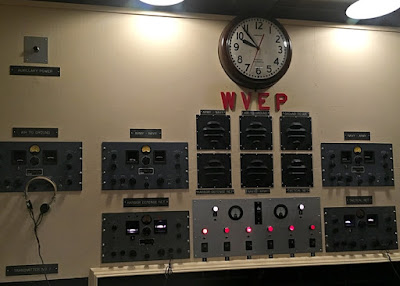 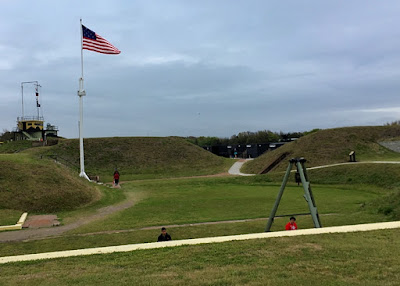 The Fort Moultrie Visitor Center itself has plenty of displays and information related to the fort and its history. Here, slavery and African-American culture get more exposure than the smaller-sized Fort Sumter, including a section on the Gullah Geechee Cultural Corridor (the unique culture developed by Central and West African peoples who occupied the coastal lands from Wilmington, NC to the mouth of the St. John's River in Florida) as well as a section on the African slave trade and the role the fort and the surrounding area had in this dubious chapter of American history. 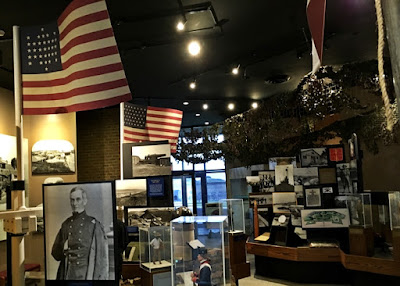 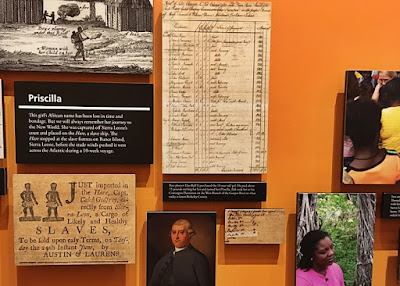 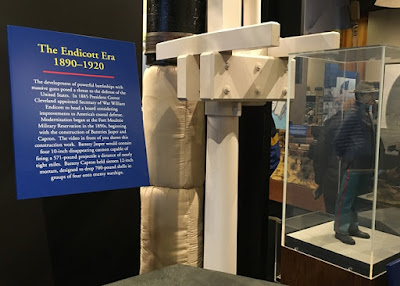 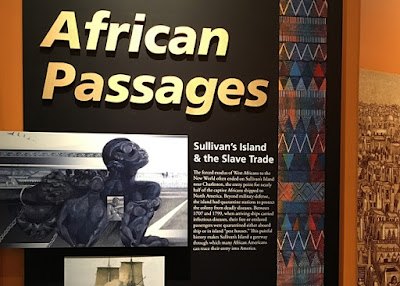 Finally, we visited a museum that in no way qualifies as your traditional tourism magnet, nor is it meant to be "Instagram-friendly". However, The Old Slave Mart Museum instead fills a much more important role as a refreshingly unflinching and deeper look at one of the darker portions of American history touched on at the Fort Sumter Memorial. 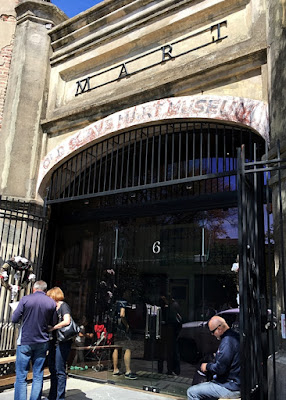 The building which houses the Old Slave Mart Museum, currently operated by the City of Charleston, has had numerous uses in its nearly 150 years of use, but the museum focuses in on the building's original use as a slave auction facility, the only one still in existence in South Carolina.  As stated on the mission statement just inside the entrance way, the museum's intent is "to broaden people's understanding of Charleston's role as a slave-trading center during the domestic slave trade" and "reach out to our community and all those ancestors' lives (who) were shaped or changed here. 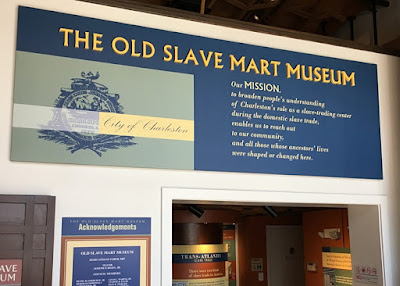 As alluded to above, the museum is not a snap a hundred photos type affair; in fact, no photography is allowed once you head into the depths of the facility. As we found out, however, this is completely in keeping with the museum's mission. With the faint sounds of what the streets of 1850's Charleston may have sounded like in the background, you're essentially alone with your thoughts as you try to comprehend how such a facility (created by a city councilman when outdoor slave sales were banned, not for moral but rather reasons of convenience and appearance) could have existed.

Having been to the National Holocaust Museum in Washington DC before, I had thought that this museum might be possibly similarly overwhelming on an emotional level. As it turned out, the emotions were intense but incredibly varied as I walked through the two floors of the museum.

For example, I felt a certain foreboding at times as I read about the deplorable details behind how the slave trade was conducted, and how an 1807 trans-Atlantic ban on the import of Africans for slavery meant that the those sold at these slave markets were born on U.S. soil.

At other times, I felt a sense of almost hopeless desperation absorbing how slaves would use what few tools were available to them to try to avoid the worst of the slave masters. And at times, I felt a sense of amazement, after hearing the recorded voices (via a 1930s-era Works Progress Administration program to document the stories of slavery survivors) of those who had actually persevered through their bondage, bowed by old age but not in spirit, telling tales of their enslavement as if it were just yesterday

As it turned out, the introductory words of our docent, an African-American woman, proved perfect for absorbing the often horrifying and saddening information within. She herself had done research on many of the slaves who had been sold at the mart, and gave us detailed introduction on three of them, almost as if they were her own immediate family.  As she was a direct descendant of that African diaspora that was forcibly brought here, that connection was heartfelt and touching.

She reminded us that these three people, along with everyone who was ever sold at the Old Slave Mart in its relatively short time (approximately seven years total) in operation, were all individuals and all deserved to be remembered on their own accord. Every visitor to the city can help make that happen by walking through those museum doors and learning their tale.