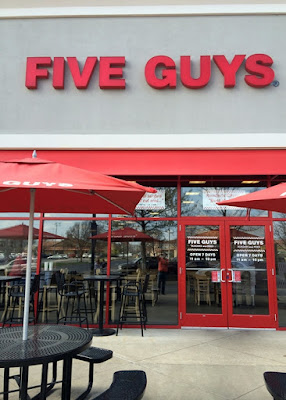 General Feel: Of the true fast food places on this mini-sampling, Five Guys' interior reminds me the least of what I have come to know of most fast food places, looking like a lunch counter (without the counter seats) married to a fairly large dining area. The tiled checkerboard pattern on the walls hint at the eatery's logo.

Bonus Points: It was hard not to notice the Five Guys supplies that were stacked as an impromptu railing leading up to the ordering station. Included here were containers of in-shell roasted peanuts that, unknown prior to my visit, are available for patrons to snack on while orders were being prepared. Who was I to refuse such a generous offer? 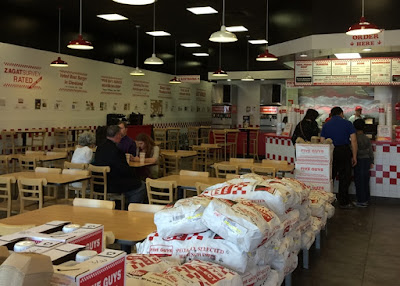 The Verdict: I knew enough was taken aback at the prices at first (nearly $5.50 for a so-called "Little Cheeseburger"), but my reticence slowly was eased when I found out that their regular Burgers actually come with two beef patties, and that their burgers were customizable to the nth degree (Five Guys claims 250,000 ways to order their burgers.) It made sense also when I was warned by my spouse that a "Little" order of fries was more than adequate enough for most appetites (while I normally am a spice hound, I refrained from the cajun option for this first visit.) 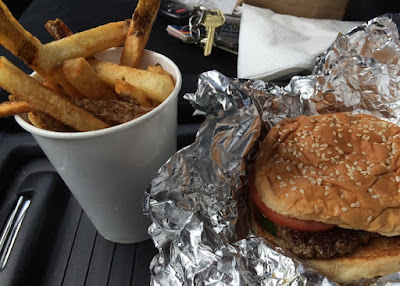 The burger for me was better-than-average, living up to the eatery's "well done and juicy" cooking philosophy, with extra credit for the sesame seed, slightly sweeter bun than typical. I also appreciated that the all the toppings you want aspect, though I kept it minimal on this order on the more unique ones (jalapenos, in this case.) 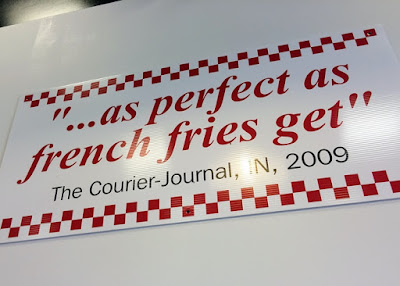 On the other hand, the fries, were just about perfect as rumored: hand-cut medium-thick, crispy outside and fluffy inside, and not overly greasy. They made for great bottom feeders in the bag as I got back on the road to finish my road tripping on this particular day. 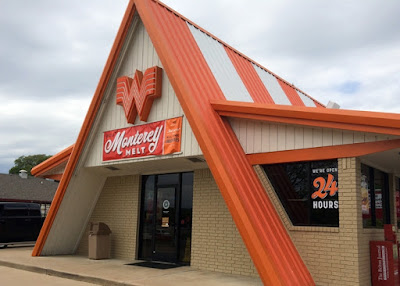 General Feel: This Belton, TX location feels like it was straight out of the 1970's; this A-frame I learned later is pretty commonly found throughout this regional chain. As a newcomer to the eatery, the exterior reminded me of what might happen if a similarly 1970s-era Der Wienerschnitzel and McDonald's buildings got married and had a baby.

The interior reminded me of the 1970s as well, unassuming but most definitely functional. This definitely wasn't terribly surprising to me; from what little I knew, Whataburger has remained completely fine with sticking to the tried and true formula created by founder Harmon Dobson many decades ago. 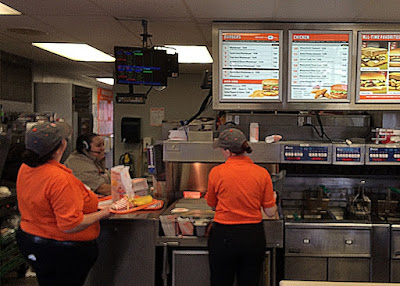 Bonus Points: Sadly, my need to get on the road ASAP put me into tunnel vision mode, so I missed out on a few potential gets. Like Five Guys, jalapenos are an option, though at additional cost.  I also missed out on at least checking if the Spicy Ketchup was available. The description of which I read on The Impulsive Buy website seriously tempts me to order a bottle of the stuff online, despite my rather limited use of this condiment in general. 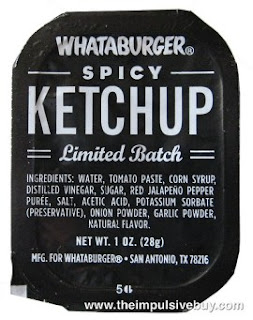 One get I did end up somewhat unknowingly was the pop: the soft drinks at Whataburger come appropriately bigger-in-Texas sizes, with my "medium" drink coming in at 32 oz. (the large comes in at 12 ounces more.)

The Verdict:  For me, Whataburger's shoestring fries were pretty much duplicates of the version put out by their omnipresent fast-food brethren in McDonald's . However, considering that McDonald's rendition remains among the best in their class for many yearly, this is a positive in my book. 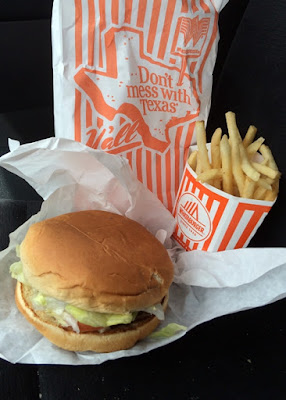 While this burger for many folks would be rated the lowest of the four tasted, a little bit of childhood nostalgia puts it second on my mini-list. Whataburger's basic burger reminds me of what came to be known to me as "Picnic Burgers." These burgers, which I encountered at family and community group gatherings, weren't anything terribly fancy: basic frozen beef patties grilled over BBQ briquets, simple store-bought buns, and all the fixings and condiments, including thickly sliced onions and tomatoes and pickles.

As I grew older and family members started leaving the next, the burgers found at these events came to symbolize a bit of home for me, where I could hang out with family and friends on a lazy weekend for a few hours, catch up a bit, and just escape the world for a bit. Whataburger's basic burger reminded me of those times, and that's hardly a bad thing at all when you're hundreds of miles away from the ones you love.
Posted by Joe