The Beans Are Not Always Greener...

It may be less evident to more and more people as time inexorably marches forward, but there was a time where Starbucks Coffee shops didn't occupy every town, or at least seem that they did.

I can remember a time when the chain was conspicuous by its absence. Vallejo and Benicia are neighboring cities along the Bay Area's Carquinez Strait along Interstate 780, but I can remember when the more highly populated (but less economically well off) city of Vallejo was mermaid-less, but the much lesser populated (but more well-heeled) town of Benicia sported a branch.

With all Starbucks being mostly corporate-owned (save for locations inside airports, supermarkets, etc.), I myself wondered at the time what Starbucks didn't see in Vallejo, or perhaps, did see. Vallejo has one of the more diversely populated cities in the Bay Area (since 1980, the percentages among White, Black, Hispanic and Asian populations have steadily equalized) and I pondered if corporate minds thought that wasn't a money-making formula.

Eventually, Vallejo's residents did get their Starbucks and proved that they as much as anyone can boatloads of Frappuccinos and Unicorn Lattes. Nowadays, the Seattle-based chain is more of a constant (with close to 30,000 branches worldwide, with half of them in the United States) versus a buzzy novelty for which many would clamor. Interestingly enough, while Vallejo currently hosts more locations than Benicia, the higher per capita still resides with the latter (roughly one for every 7,000 residents for Benicia vs. 1 for every 20,000 residents in Vallejo.) 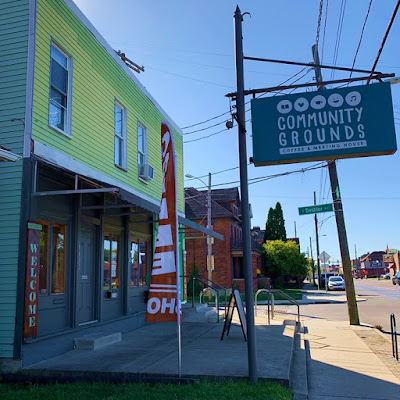 I admit Starbucks has its purpose - it's far better than most fast food coffee options - but my spouse and I far prefer supporting the truly locally based coffee cafes.  A bit of an underdog element certainly doesn't hurt either; that aspect can certainly be applied to Community Grounds, located just south of the Southern Orchards neighborhood along Parsons Avenue.

To say Joel Cosme Jr's. trek to get the coffee shop going has been a long one is selling it short - as detailed in this May 2019 Columbus Underground article, the path to even get the initial Indiegogo fundraising effort in 2014 was an uncertain one, with bouts of family homelessness in Seattle and Minneapolis. The five years it took getting the cafe open to the public (with bouts with questionable contractors, illnesses, and other factors) may have been shorter in length time-wise for Cosme than his previous struggles, but it may have felt just as arduous at times. But perseverance has paid off in a really lovely cafe on the south side of the metro. 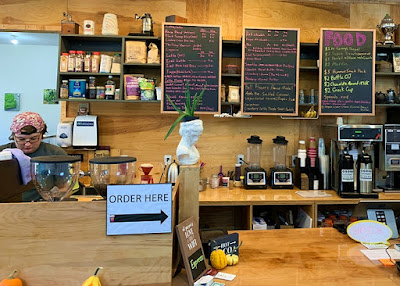 Similar to Yeah, Me Too, and San Antonio's Barrio Barista, this is type of coffee shop I would love to have within walking distance.  The setup is pretty conventional and similar to other cafes, but the drive to engage with its surrounding community is more paramount here. Coffee beans are provided by both Brioso Roastery and Grounds for Change, and local vendors like Tupelo Doughnuts and Sammy's Bagels provide nosh options with your java. Lending to the neighborhood feel here, the main entrance to South High School, the fourth high school established in the city's history, lies a couple blocks to the east on the brick-paved East Deshler Avenue. 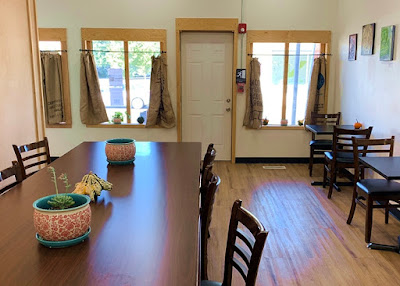 The interior feels much more like a home, warm and inviting, and I happily perched myself atop one of the couches after placing my order to take a look around. A cork billboard off in one direction had flyers for all manner of community events; meanwhile, an eye-catching giraffe construct, constructed by an artist at Art Outside The Lines (whose main program assists artists with developmental disabilities), drew my attention the other way, until the gal behind the counter (friendly service and only happy to answer my questions) brought out my espresso shot. 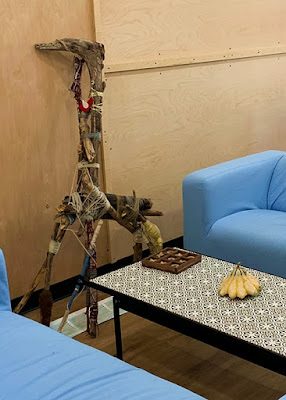 As I sipped on my espresso, I glanced over in another corner at a man and woman, whose outside appearance and speaking manner hinted at a rougher life than typical.  After a brief couple dozen seconds of listening in, the general gist of their conversation was pretty clear: they were inside, like almost any two people would be in any other random coffee-oriented cafe around the metro, talking about how life was going with each other.

I dove back deep into my own mind and pondered if this couple would feel as comfortable to stop in other coffee places and chat away over a coffee or two? Maybe, maybe not, but I suspect for those who make Community Grounds a regular stop, the coffee beans aren't greener on the other side or Parsons or any other street. They're perfectly brewed here, with comfy blue couches and where the giraffe stands guard 24/7.