The Nostalgia Bin: Columbus and Beyond

Walking around a place like German Village's Book Loft, I almost always am drawn to their Travel section. But as much as I am drawn to far off places my spouse and I would love to travel, I have never seriously thought about buying one of those books. Perhaps more than many reference books, travel guides have a built-in depreciation factor: attractions, lodging, and eating establishment invariably change or even close outright over time.

However, an older such guide can act as a bit of a snapshot in time. Couple that with a city like Columbus that isn't really a focus of the travel guide producers (I checked Amazon.com - that's a negative, ghost rider) and you have an interesting find from one our recent estate sale excursions: "Columbus and Beyond: Travel Tips and Topics," a 1986 book authored by Fred and Anne Zimmer. 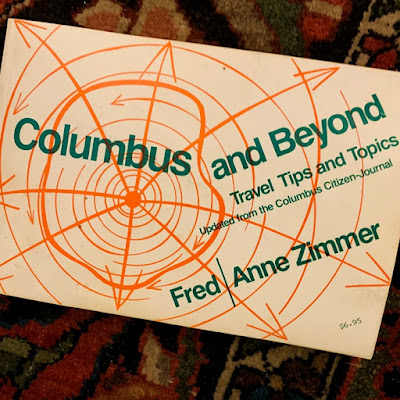 As I discovered, the Zimmers led the proverbial interesting life: born in Washington DC, Anne moved to New York City and worked as a freelance writer until she met her husband Fred (from Pataskala.) From there, they moved to Columbus, where he became one of the founding professors of Ohio State University's Design Department and she completed a Masters degree.

The couple later journeyed around this country and the world during Fred's Fulbright years; many of these travels were documented in columns written by Anne in the Columbus Citizen-Journal newspaper. The Zimmers later moved to Upperville, VA, where they became involved with numerous historical sites related to General Robert E. Lee, eventually publishing the "The Robert E. Lee Family Cooking and Housekeeping Book" in 1997. In a bit of coincidence, 2015 turned out to the final year for both the Zimmers (who passed within six months of each other) as well as the Columbus Citizen-Journal, which ceased publication on December 31st.

The book itself is interesting: with most of the writing done by Anne and illustrations by Fred, the guide is less a rote list of things to do/see/stay but more of a series of mini-essays on their experiences in Columbus, surrounding areas, and even a peek at their international travels. The forward, given by local columnist Larrilyn Edwards, lauds that the Zimmers "poke fun where it needs to be poked..." and "find delight in details others don't see." 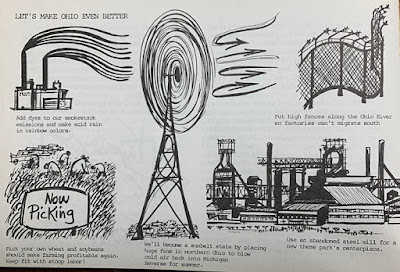 That starts immediately in the first section, "How To Show Off Columbus", where they describe a German Village "banana plantation" and then describe how to bring the city's best features forward to visitors, routes that would show off "the new skyline" or US 33 along the Scioto River, where the riverfront houses and greenery "look almost like suburban Minnesota."

Other snapshot items in this feature detail the hole in the street in front of the Palace Theatre which swallowed a Mercedes (a hole "that did more to publicize Columbus than a year's worth of promotions"), driving by the "medieval fortress-like gate of the old Ohio Pen" for a photo op, and then stopping by the One Nation Restaurant at the One Nationwide Plaza Building for a drink and a scintillating 38th floor view of the metro.

Always interesting are referenced places and whether they still exist: in this article, Helen Winnemore's (where one can enjoy a cup of coffee or tea while surveying the various arts and crafts), The Gourmet Market (now Spagio), Easy Living Deli in Upper Arlington, and Bexley's Hot Bagels (guessing a bit that this is actually Block's Hot Bagels) stand out as businesses that operate today. Meanwhile, Zeta's in the Miller-Kelton area, Sinbad's and the Crestview Market north of the Ohio State University campus, and Grandview's The French Loaf are now just simply memories.

Another amusing section resided in the "Sooner or Later Almost Everything Comes To Columbus" section.  The Zimmers note that while "many cities get worse, Columbus is getting better," touting the arrival of a genuine real bagel factory, the newfound availability of ingredients for Chinese, Greek and even "white water-ground corn meal for Southern spoonbread", and the actual presence of Indian and even an Indonesian restaurant.

They did note Columbus's notorious nature for tossing its history aside, noting the loss of the Hartman Theater on East State Street, the Venetian-styled Peruna Factory at 3rd and Rich, and the Monypeny Building, but balanced that with mention of the promising North Market as well as active discussion on saving "the brewery and warehouse district near German Village."

Many writing focus in on various destinations, both in Ohio (including Toledo, a city the Zimmers really like, saying readers should take a trip so they could "decide...whether or how Columbus needs to play catch up," and a glance at Fred's hometown of Pataskala) and at numerous destinations around the country (I personally chuckled at how aghast they were at California's $1.50 ice cream cone.) 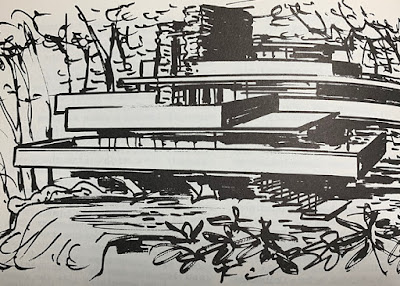 The Zimmers' sense-of-humor comes through the most in their whimsical writings, including the movie-making potential of "Hollywood, Ohio" (the Zimmers joked that the state could have been paid to get rid of the Ohio Penitentiary if they allowed it to be used as a French Bastille stand-in - little did they know then that the Ohio State Reformatory in Mansfield would prove to be the iconic choice in 1994's "The Shawshank Redemption.") as well as "There's No Place Like...Columbus?", which in some way predates the whole "first world problems" trope by about three decades, half-joking about how annoyed they felt about four-day-long mail delivery to their house and how teeth brushing with tap water had lost its enjoyment factor after their most recent travels overseas.

So are there any big conclusions to make from the Zimmers' recollections of Columbus from the mid-1980s?  Aside from being a fun read, the book for me is still a sign of what Columbus isn't. As much as Columbus has evolved in the thirty-some years, I doubt anyone would argue that the city is even close to a destination in the way places like Paris, London and New York City are.

This status is something like the flip of a coin, both with a bad and good side. I am reminded of what Doc Brown in "Back To The Future III" stated to Marty McFly, after he saw a blank piece of paper had replaced a ominous message that had led to the dire events in McFly's life in prior sequels. Brown stated, "It means your future hasn’t been written yet. No one’s has! Your future is whatever you make it.”

On the bad side of the equation, will Columbus's current economic and positive perception momentum lead to something in the end where the haves end up having more and those who don't get a big dose of the status quo?

Or, on the good side, can this momentum be focused into a tide that raises all classes and areas around the metro, a tide that conjures up a city slogan far more inspiring than past efforts like “Columbus, We’re Making It Great” and “Surprise, It’s Columbus.”
Posted by Joe