Almost every small town seems to have at least one.

One what, you ask? In this case, I refer to the random international restaurant or two that provides a prospective diner a break from the plethora of fast food, diners, and pizza joints that tend to dominate the landscape. The food, when judged by other similar eateries in bigger cities and towns, may not match up. But as a resident of that town, you take a bit a pride in knowing that something is your hometown Chinese, your local Mexican, or even something even a bit more uncommon.

Worthington is essentially on the larger end of the small town quotient. Physically, it is an island surrounded by the sea of Columbus, mainly due to what happened after World War II. Ohio’s capital city back then decided it would be not unlike Star Trek’s Borg Collective, assimilating as many neighborhoods and land tracts around its traditional urban core as it could get a hold of. Worthington did this as well, but at a far smaller scale, eventually leading to a unique situation where the older town has been enveloped by its once far-away younger neighbor.

The way things have developed, unique international restaurants aren’t really all that far away for Worthington’s residents - a quick jaunt east on Route 161 provides access to cuisines from Persian to Salvadoran, Vietnamese to Kenyan, and more; even more options reside in other directions from the city core.

Worthington itself has what you might say is a select core of international restaurants: by my count, the town has a single instance each of Italian (Buca di Beppo), Greek (Yappy Greek), French (Le Chatelaine), Mexican (the Tomatillos/Diamonds mashup), Mediterranean/Lebanese restaurant (Aladdin), plus a smattering of exclusively Chinese eateries (Main Moon, China Way, and Golden China Express.) Perhaps it is a surprise, then, to actually find an outlet of a growing yet still unique cuisine right smack in downtown itself. 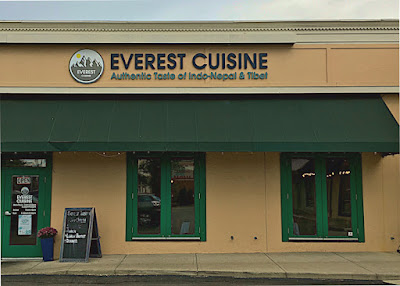 Opened in early 2018, Everest Cuisine offers a plethora of Tibetan, Nepali and Indian items for the dining public. Locally, the former two cuisines have received time in the national spotlight via Columbus’s Momo Ghar, whose momos (Tibetan Dumplings) have gained attention from such shows like Guy Fieri’s “Diners, Drive-Ins, and Dives” and Food & Wine Magazine. We've found that Everest Cuisine’s momos aren’t quite as good as their counterpart, but they more than still get the job done when you’re craving a dumpling or three. 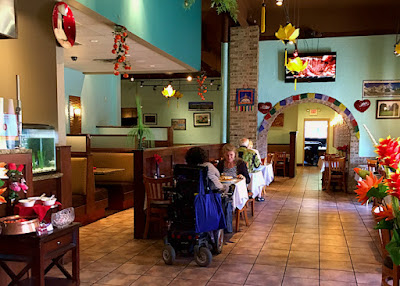 Instinct might lead one to think this might be a hole-in-the-wall type operation, but a first time visitor to Everest would be quickly disabused from that notion. The building, which once held the likes of the seafood-oriented Rivage Atlantique and A Taste of Vietnam, has the atmosphere for a nicer dinner out. 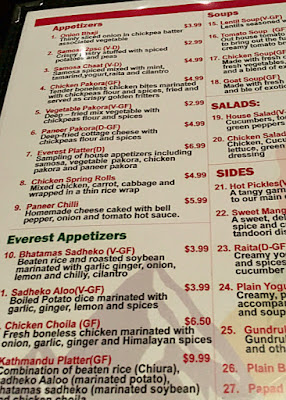 The restaurant's menu is fairly extensive, to the point where one might conclude they can’t possibly do everything well. For those that who are still learning the ins and outs of the cuisine (a vast majority of Columbus-area residents) however, this status actually works well, especially if you’re the adventurous type. Some items are familiar if you frequent Indian restaurants (i.e. curries, vindaloos and biryanis) but other items like those momos, khasis (dishes with marinated goat), and the thali platters are probably items most have not tried too often, if at all.

One thing I do appreciate about Everest is that for dishes that incorporate spicy heat levels (1-6 in this restaurant’s case), the staff actually makes it at the requested level. The high levels are pretty potent, but aren’t generally sweat inducing, at least for us. In terms of quality of food, everything has been pretty solid; based on the number of visits we’ve made, most of our outings have been of the been of the takeout variety (the restaurant does seems to do well in that realm.) 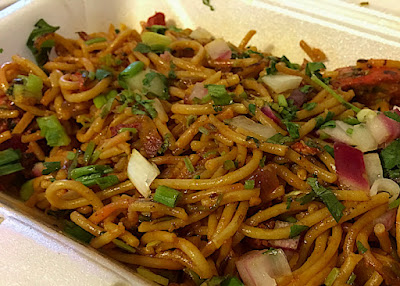 If you do visit, perhaps one might ponder while slurping down Thukpa (a Tibetan noodle soup) about the actual existence of Everest Cuisine. Essentially, this is a restaurant within a downtown modeled after a English-style village green setup serving the cuisine of a subcontinent that was once claimed by England itself. It even sports a mashup on their menu (Chicken Tikka Masala) that some say was fashioned in the British Isles themselves.

Or if that’s too flighty or weighty a subject to ponder, one can simply bring a willingness to exercise their culinary curiosity. A good and delicious place to start might just be Everest’s relatively inexpensive buffet lunch: just be sure to bring your wallet or purse, and a big appetite.