The modern concept of the football tailgate is said to date back roughly a century to the then dominant Ivy League schools, but historians and researchers have traced the tailgate’s origins to the U.S. Civil War and even to old Roman Empire rituals.

Considering my interest in things sports-, food-, and history-related, it’s really no surprise that “The Official Tailgating Cookbook” would catch my eye during a random thrift store visit. What I found inside made it worth far more than the $1 (an 80% discount over its original cover price) I forked over at the cash register. 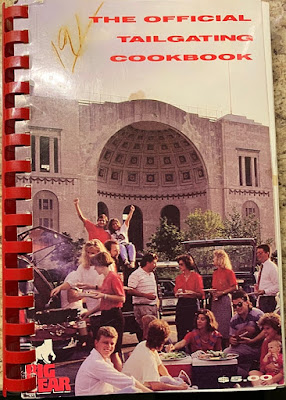 Big Bear Stores, the publisher of "The Official Tailgating Cookbook", is generally remembered fondly by local residents. Founded by Wayne E. Brown in November 1933, this regional grocery store chain numbered around 70 stores at its peak, and was among, if not the first, to utilize innovations like conveyor belt checkout areas, computers, and even a trolley line. Its 1954 prototype store established at Columbus’s Graceland Shopping Center proved to be the blueprint for the modern grocery store.

Upon first glance, this spiral-bound Big Bear cookbook, published as a way to raise funds for LifeCare Alliance and its Meals-on-Wheels program, is not unlike those numerous organization cookbooks you can find in many antique and thrift stores. In fact, many of these particular books were put out by Morris Printing Group out of Kearney, Nebraska, as this Atlas Obscura article details.

Unsurprisingly, numerous recipes from supporters to this cause can be found distributed in "The Official Tailgating Cookbook", with appropriately football-themed sections (for example, Appetizers reside in the "1st Quarter" section, while Entrees and Desserts can be found in the "Touchdown" and "Extra Point" chapters, respectively.) A fair number of these recipes come from one Smokey L. Bare, almost certainly (by my guess) a nom de plume for staff members at Big Bear. 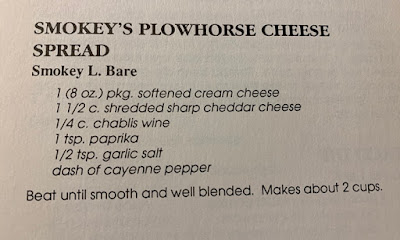 However, unexpected nostalgia value can be found in the celebrity recipes scattered throughout this 140-page tome. Most of these contributions come from the political realm from all levels from local to national.  Browsing through this cookbook will uncover recipes from then-local office holders like Columbus City Councilwoman Cindy Lazarus and Upper Arlington Mayor Priscilla Mead, sprinkled in with contributions from state level folks like Governor Dick Celeste, and then big dogs on the national scale such as “U.S. Congressman” John Kasich to Senator Sherrod Brown and a couple recipes each from John and Annie Glenn and then First Lady Barbara Bush. 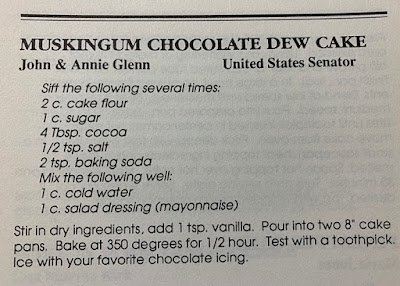 Of course, you can’t have a Central Ohio tailgating book without some Buckeye love, including Mrs. Earle Bruce’s BBQ Sandwiches (contributed by one Sue Glander) and Ohio State Head Coach John Cooper himself, with his own recipe for (what else) Buckeyes. 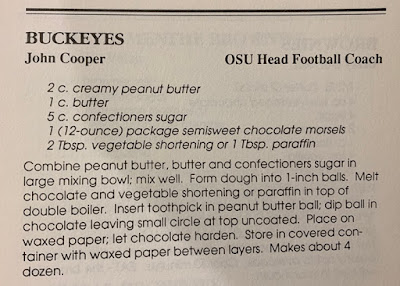 While "The Official Tailgating Cookbook" has no printed publication date that I could find, the publication year is most likely 1989-1990. Here, celebrity recipe contributors provide the major clues, mostly with Cooper himself (who started as head coach of Ohio State in 1988) and the previously mentioned Upper Arlington Mayor Mead, who served in that role from 1986-1990.

Perhaps the biggest challenge, like any new cookbook one acquires, is which recipe to start with. The nostalgic restaurant recipes, especially the extravagant-sounding "Frango Raspberry Chocolate Pecan Torte" from Marshall Field's Gourmet Torte, offer the most intrigue for me, but then again, then State Attorney General Anthony Celebrezze's Cheesecake seems just as tasty and far more simple.

Or maybe since this was a random find, perhaps closing the book and opening to a random page is the best way to go.  I don't think Smokey L. Bare will mind that approach one bit.
Posted by Joe