From Zane's Trace to Outer Space: A Journey into Muskingum County

The long road trip test isn’t always recommended for potential relationship testing, but it will almost always give you a definitive answer about viability of a partnership after a single experience. Our first road trip together covered at least 500 miles over a several day period. Our second trip was even longer, including a 350-mile circuit of Oregon in one day that started and ended in Bend, but in between included an 8-mile hike on Mt Hood, donuts in Portland, and dinner with relatives in Tigard.

An off-the-cuff trip recently into Muskingum County proved to be a fairly short jaunt by those standards, but the sites we visited for the most part were all about the longer journey, including one instance which covered approximately 75,000 miles.

The original National Road, started in 1806, was for a time the only substantive land link from the coastal states into what was then the western sections of this country. The National Road & Zane Grey Museum in Norwich, Ohio, was not our main destination this day (in fact, we hadn’t even realized its existence until we spied it from the road) but it proved to be a fun first stop.

The museum starts off with a few outdoor exhibits of interest like an original National Road mile marker and a trailhead to Zane’s Trace, a rudimentary trail predecessor to the Road itself that was suitable only for travelers either on foot or horseback. 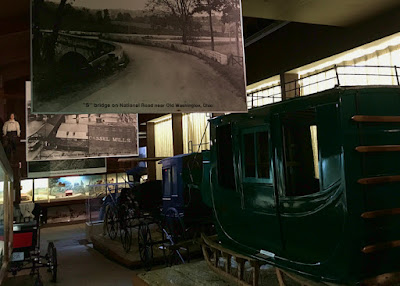 Inside, the museum is broken up into three sections. Most of the museum is devoted to the National Road itself, from initial concept (a passageway that could handle the transit of goods and people in and out of the frontier) to its heyday and eventual decline due to the advent of the Interstate Highway System. While many real-size examples of vehicles and other travel-related media is available, the detailed miniature dioramas here do the heavy lifting in terms of describing what life was like traveling the road back then. 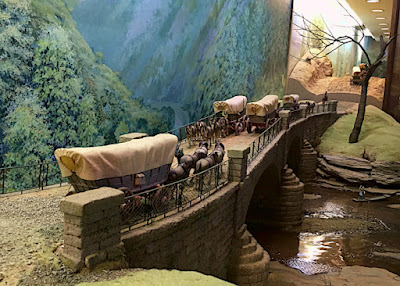 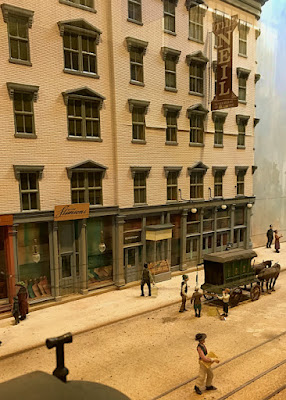 Another section is dedicated to author Zane Grey, whose adventure books helped shape the Western mythos. The popularity of his books (Grey has sold more than 40 million copies of the 90-plus books that he has authored) made him one of the most recognized personalities of the first half of the 20th century and helped spawn Hollywood’s initial infatuation with the Western genre. Grey also proved to be talented in a variety of other fields, from dentistry to baseball to, in his later years, fishing. 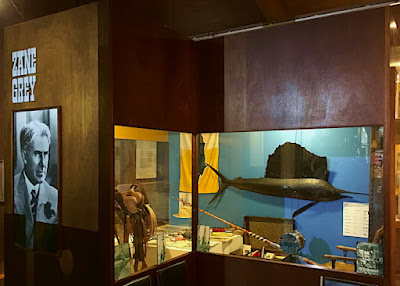 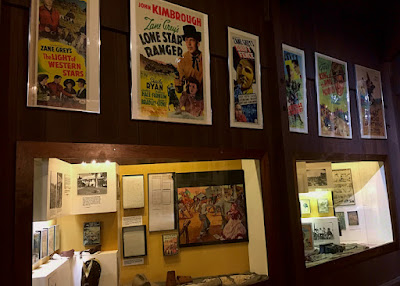 Finally, one can wander into the center of the museum and admire the pottery pieces from the storied manufacturers based in nearby Zanesville, a state hotbed for this artistic venture since the mid-1800s. 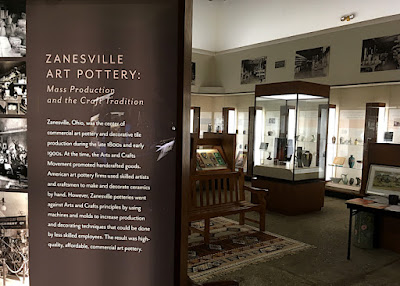 Our main destination this day also turned out to have a surprise for us as well: The John and Annie Glenn Museum in the downtown area of New Concord. 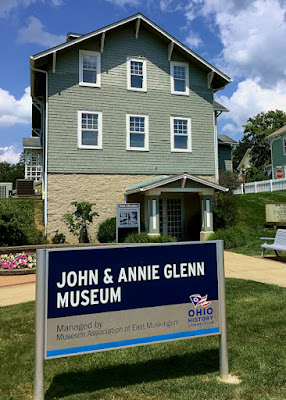 We figured this visit to the museum, which resides in the Glenn family's original home in downtown New Concord, would be a fairly quick one, with a few displays that would detail John and Annie Glenn's life from childhood through John's famous stint as an NASA astronaut and then their later years as John transitioned into political life and Annie became a advocate for those suffering from disabilities and speech-related disorders. 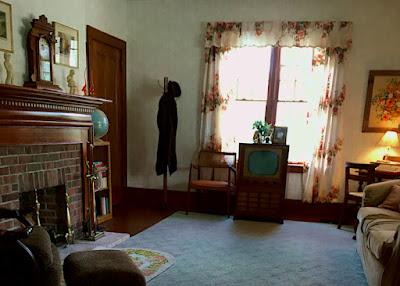 The interior of the house itself doesn't stand out in any particular way - it is pretty much frozen the modest furniture and decor during the early 1960s. This decor actually helped make this visit so vivid, as we had not realized prior to our visit that the museum has a living history component.

In previous years, the house had been alternatively decked out to mimic the years 1937 and 1944, The 1962 edition, which we were treated to, was introduced by museum staff in 2017. On this day, we were led on a tour by a docent playing the role of John's father, John Herschel Glenn Sr., just after Glenn's 1962 space flight. His explanations of even the most simplest house items made you feel like you were guests of the family, as opposed to media types whom John Sr. was apparently mightily wary of during the months just before and after his son's famous journey. 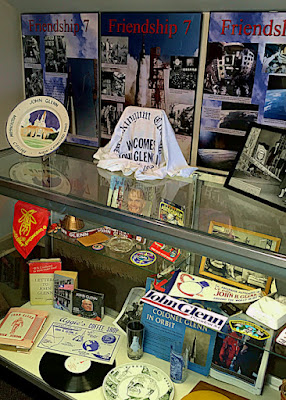 The original house has been expanded to accommodate the various displays as well as a small gift shop and a space to watch a Muskingum University-produced film on John and Annie Glenn. The museum has also taken over the regular operations of the National Road and Zane Grey Museum in Norwich, making these two attractions a natural pairing (a "Yesteryear Pass" will get you inside both museums at a discounted rate; an active Ohio History Connection membership will get you in free to both locations as well.) 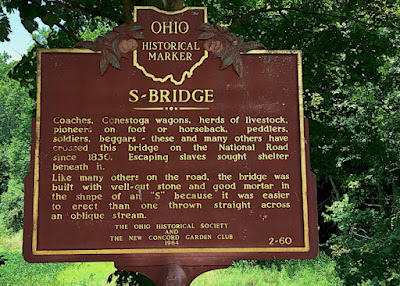 Two more options in the area are relatively easy to get to from the John and Annie Glenn Museum. Just west of New Concord, the original Fox Creek S-Bridge can be found off the main road into town.  The unusual curvature of the bridge, like others originally scattered through the National Road, was not an artistic choice but rather a practical one: builders of the road found the construction much easier by curving the road such that the bridge went in perpendicular to a stream or similar. 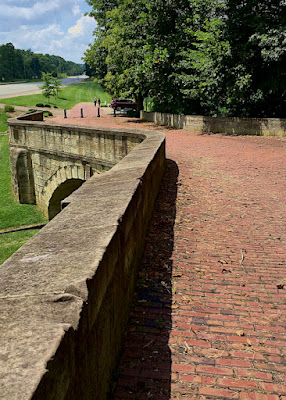 Finally, a 30 mile trip north of New Concord on State Routes 83 and 93 will get you into neighboring Coschocton County and Fresno's Wooly Pig Brewery.  Not much has changed with the brewery since we first visited it (as detailed in this blogpost) in terms of the formula (highly drinkable and well-made German-style beers with an occasional food truck (on this visit, the home styled goods of Grandmom Minnie's Munchies), an outdoor patio, and a very child-friendly farm setting.) 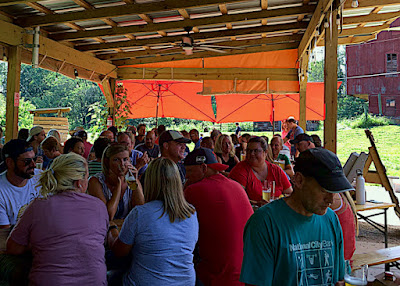 But on this visit, the farm's Mangalitsa Pigs were far more prevalent in number as well as the pork products produced from those pigs, which were available for purchase from an staff member tending to a chest freezer out on the patio (a prepared ice chest would be advisable if you're interested in a purchase, especially if you come from more remote corners of the state.

It's a bit of a haul for many, but if you're looking for something both relaxing and a touch out-of-the-ordinary for a brewery, Wooly Pig is a place worth checking out. 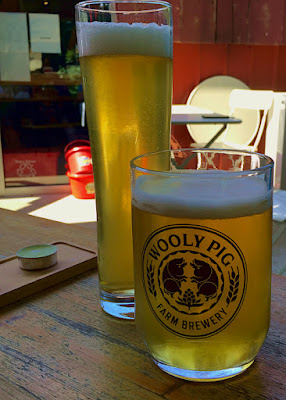