For all the hype meat substitute like the Impossible Burger and Beyond Meat have received in the past few years, perhaps the most original of O.G. meat-substitutes, seitan, has been creeping into more menus as well. Essentially wheat gluten, this has been used in Asian countries in cooking for centuries, though the word itself dates back only sixty or so years to Japan, where George Ohsawa coined the term. For many vegans, seitan is a pretty standard staple in their diet.

Also, while it would be easy to pronounce the term like the name of the oft written about Prince of Darkness Satan, most folks I’ve chatted with state that say-TAN or say-TAWN (emphasis on the second syllable) is the accepted pronunciation.

We probably wouldn’t have paid this bit of trivia any mind even a few months ago or so - we had an occasional dabbling here and there, but it never made an impression on us until this year’s trip into Pennsylvania. Our visit to Lawrenceville’s B52 Cafe opened our eyes wide to seitan’s possibilities, with dishes like their tasty Kofta Tofu Scramble and the even better Seitan Shawarma. On this meal, we didn’t miss the traditional meat or pork proteins one bit.

As it turns out, two Columbus culinary entities, one spanking brand new and one well-established, have come out with their own seitan-based items. Would they fulfill our dreams of something just as tasty here as we had that morning in the Steel City? 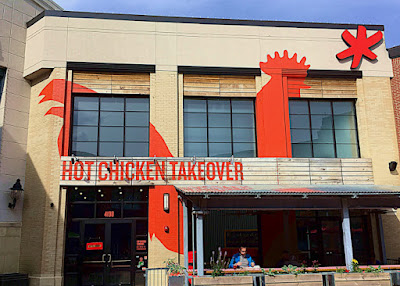 Hot Chicken Takeover probably now qualifies as a Columbus staple, with three outlets here and, similar to Brassica, making the leap into the Cleveland market. Their existing menu was decidedly not vegan-friendly, but their recently announced “Not Chicken”, a chicken substitute made with their own in-house seitan recipe, would be their first dive into providing a hot Nashville-styled option friendly to vegan eaters.

Sampled at their Clintonville location, we found out their Not Chicken is served two ways - open-faced with two slices of pickles or in sandwich form. The Not Chicken patty in many ways resembles something you might find in your standard chicken sandwich at a fast-food joint, with a texture pretty similar to your basic pop-in-the-oven frozen chicken nugget. No one would mistake this texture-wise for a real piece of chicken, but otherwise there's nothing off-putting about it. 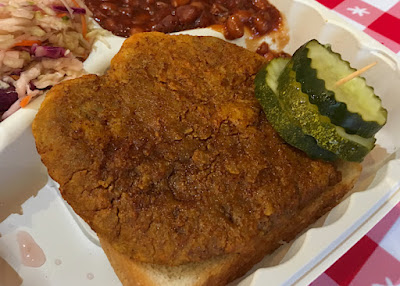 One thing we did notice was heat level - whether its due to the flat surface, the texture of seitan, or a combination of both, the heat level of the Not Chicken didn't quite match the heat level of the Drumsticks (both ordered at "Hot" level) we had also ordered this day. This can be seen as a good or bad thing, depending on your love of spicy heat.

Perhaps most importantly, the taste of the house-made seitan blend was perfectly fine. At the end, we thought of the Not Chicken as a nice option to have, especially for the vegan crowd. Hardcore chicken lovers probably won’t be swayed, but I can see us dabbling in it every now and again in the future. On a side note, the vegan Baked Beans, which we also sampled here for the first time, are quite good, a worthy side item consideration no matter where your protein loyalties lie. 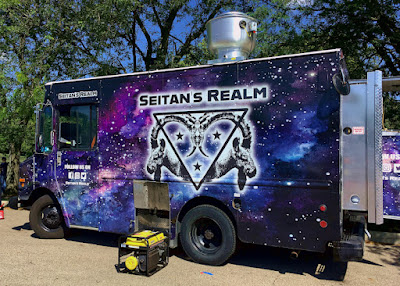 Cousins Maine Lobster may be the king of long lines in the world of local food trucks lately. However, the vegan-focused and cleverly-named Seitan's Realm (with an equally cheeky and catchy exterior food truck design) has been more than holding its own in that department. 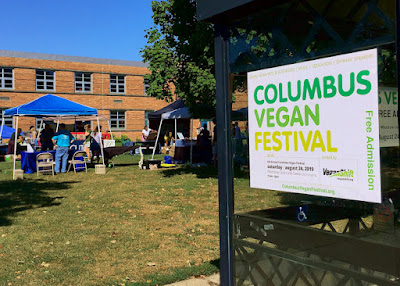 If anyone had their doubts about the buzz surrounding this truck, the fifth annual rendition of the Columbus Vegan Festival at Whetstone Community Center would’ve obliterated them. An interrupted attempt to go to Flowers & Bread across the High Street led to me checking out the setup, where I found out this truck (one I've been itching to try) would be making an appearance. Arriving 20 minutes before the festival's official opening, I figured a quick jaunt to get coffee at the nearby Global Gallery would get me back in plenty of time to grab what would be my first meal of the day. 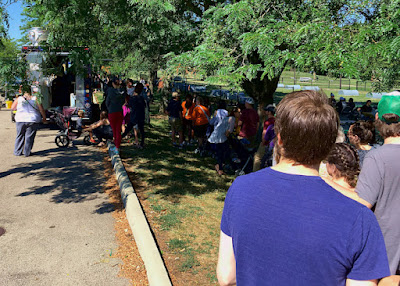 That turned out to be a miscalculation: despite a fairly promising and extensive collection of food vendors (people I talked to said this was by far the biggest event they had seen) and arriving back only 20 minutes after the festival’s official start, I discovered a substantial line for folks craving the culinary creations of Seitan’s Realm had already built up. However, armed with coffee and having nothing better to do, I decided to wade in for my first sampling.

What turned out to be a 40-minute-long experience from standing in line to receiving my order (not bad all things considered), allowed me to contemplate the menu, which continued the cheeky vibe with a bevy of comfort classics done vegan style from “Cheestake” to “Beaf & Chedduh” to “Classic Roast Beaf.” 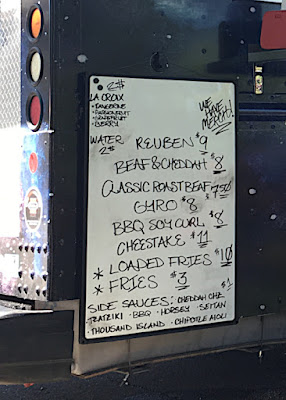 The folks in line on either side of me were food truck devotees and recommended just about everything, which didn’t exactly help matters when it came down to choosing. After much deliberation, I decided on the Gyro (which I figured would be the closest match to the B52 Cafe Shawarma) and Fries. 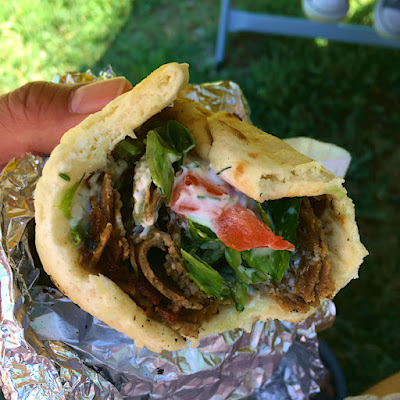 I’m heartened to say that this first sampling was a success - I would’ve never guessed this was a fake meat creation one bit if you hadn't told me it was. It’s not as memorable as the B52 Cafe creation (the Middle Eastern spices in their shawarma were just divine) but their seitan preparation was pretty similar, looking a lot like strips of gyro meat (bonus points for some charred, crunchy bits.) The curly fries (perhaps second behind tater tots on my french fry love scale) didn't hurt either.

With regular stops at places like Virtue Salon, the German Village-located Antiques on High, and  Oddfellows Liquor Bar (perhaps taking the place of Woodhouse Vegan, who is finally moving into their brick-and-mortar in Italian Village), Seitan's Realm is a food truck I am more than certain I'll be stopping by again soon.