Kansas City's Freight House, located in the city's Crossroads Arts District, has something of a similar story as Columbus' Union Station in the Short North. In both cases, both buildings were vital when the train was king, and both slowly fell into disrepair and neglect as other forms of transportation like automobiles and trucks became the main modes.

Unlike Union Station, which was torn down in favor of newer development, Kansas City's Freight House was saved from destruction by investors who renovated the structure into restaurant spaces, including Lidia Bastianich's Italian-cuisine-based eatery Lidia's and Fiorella's Jack Stack Barbecue, a higher-end major player in Kansas City's barbecue scene. City Tavern had been the third restaurant at this building until 2010 when it closed; in its place came something of what seemed to be an upscale version of Columbus-area eateries Mozart's and Schmidt's.

Grünauer, opened by the chef of the same name (Peter Grünauer, owner and operator of several well-regarded restaurants in New York including the once four-star-rated Vienna 79), is meant to recreate the experience of family's restaurant back in Austria for diners of Kansas City. Both eateries are firmly ensconced in artistic districts of their respective cities, and Grünauer offers a subdued artistic vibe within the interior's high ceilings and brick- and tile-lined walls. This visit essentially served as our fancier, dating-anniversary dinner during our road trip to and from Colorado.

The food (and likewise the prices) rates as a step up from what Columbus-area diners would find at places like Mozart's and Schmidt's. Aside from the wurst, schnitzel and goulash, Grünauer offers classic Austrian dishes such as Tafelspitz (beef in a consomme, with root vegetables and apple horseradish, chive, and creamed spinach sauces), variations on Rostbraten (center-cut strip loin), and Kalbsleber Berliner Art (sautéed veal liver with mashed potatoes and caramelized apples.) 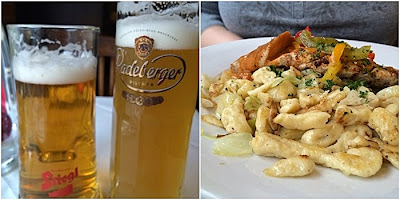 We wanted to grab something we couldn't get in Columbus, so we went with the Schweinebraten (roast pork loin and shoulder with bread dumplings and red cabbage) and my spouse went with the Paprikahuhn (chicken breast grilled with paprika, plus spätzle with a creamy paprika sauce and pickled vegetables.) Both were quite köstlich, and paired with our German-styled beers (while Grünauer offers mainly German-produced beers, they do have a few select American craft brewers including Kansas City-based brewers KC Bier and Boulevard) our dinner and the restaurant itself proved to be a perfect setting to catch our breath a bit and relax before the final leg of our journey back to Ohio.