In Columbus, fried chicken has become something of the new "in" food, with well-regarded recent arrivals like the Short North's Double Comfort and the former Olde Towne East/current North Market vendor Hot Chicken Takeover (their take on Nashville-style chicken earned them a Best New Restaurant nod by readers of Columbus Alive), and a new entry from across the Pacific Ocean creating some initial good impressions (Korean Fried Chicken purveyor Bonchon in Northwest Columbus.)

These places have either made a favorable impression on the spouse and I, or are awaiting visits from us in the very near future. However, all the hubbub over the past year created by these newcomers hasn't made us forget about what now qualifies as relative veteran in this genre, and a veteran that for awhile looked it may have kicked the proverbial chicken bucket.

Mya's Fried Chicken mobile food truck had been a regular fixture in its Clintonville location next to the Super Food Mart convenience store since its opening in the summer of 2012. Owner Mark Tolentino, a professional chef with nearly 17 years of experience in the restaurant and catering scene on the East Coast and Ohio prior to starting Mya's, not only loved southern-style fried chicken, but also found it hard to find it around the Columbus area. This inspiration, in combination with the increasingly burgeoning food truck scene, brought Mya's to life.

Along with its very delicious rendition of fried chicken, Mya's also stood out with their occasional delving into Filipino cuisine, another cuisine that is not found much around the Columbus metro. On their Filipino nights, the owners did a good job of introducing locals to some of this cuisine's basic dishes, producing solid renditions of pancit (the Filipino version of lo mein or chow mein), adobo (meat stewed with vinegar and other various spices and sauces), lumpia (a Filipino egg roll) and leche flan, a sweet custard dessert.)

Everything seemed to be operating as normal when on an early weekend in September 2014, a post on Mya's Facebook page reported food truck problems and a closure over the weekend to get them fixed. The hiatus lasted well beyond that weekend, however, with an October Facebook post from Mark stating that his food truck was going on hiatus but that the ultimate aim was to reopen in the near future.

And then, nothing. I had originally written and initially finished this blog post on Mya's a day or so prior to the first post reporting the truck issues in September. This post, like the truck, stood in hiatus as every check back on their Facebook page came up with no new updates as to the food truck's fate, I wondered if both this blog post and the tasty fried chicken & biscuit sliders would be my last mementos from this mobile vendor.

Finally, a source in the know indicated that Mya's may be stirring to life soon, and a Facebook post from owner Mark confirmed the good news: they were gearing up for a comeback. There were a combination of factors for the hiatus mentioned in the post, but in reality, the fact that they were coming back was by far the most important detail. 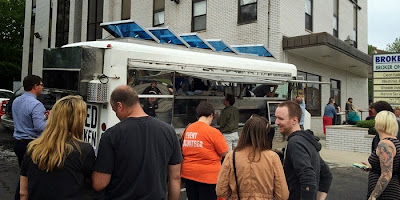 We dropped by on Mya's reopening day of May 14th at their new location just a little farther up North High Street but still smack dab in Clintonville. The first thing we noticed was the space was a lot more roomy than their previous convenience store location, with more spots to park and a couple tables set up in front of the nearby office building for those who wanted to dine there. The second thing we noticed was the enthusiastic crowd, all seemingly long-time fans happy and ready to welcome an old friend was back in the neighborhood again.

And the food? The fried chicken was as crispy and juicy as we had remembered it; along with a collection of solid sides (our favorite is their Mac and Cheese), it made for a terrific dinner.

Mark himself came out of the truck to give a heartfelt thank you to everyone who was waiting for their orders, and during my brief chat with him, he promised Mya's would eventually go back to similar operating hours before the hiatus as well as more special Filipino cuisine nights. But for the time being, Mya's will be sticking with limited dinner hours (Thursday thru Saturday 4:30 PM - 7:30 PM.)