Interstate 70 scrapes the northern edges of the town of Salina, KS; if you want to drive into the downtown or the more populated south side, you will have to dip southward on to old US Route 40 or venture down on Interstate 135 towards the regional airport and Central Mall. The latter is the detour we took down to find the modest strip mall eatery that is Seoul USA.

I'll start off immediately by saying the food here are mostly the basics (bulgogi, kalbi, etc.) and the somewhat toned-down flavor profiles probably would disappoint hardcore aficionados of Korean cuisine. With that said, our visit to Seoul USA was enjoyable - the staff behind the counter were welcoming and friendly, with numerous regulars in house or stopping by as during our time there.

The banchan was a serve-yourself affair, allowing customers to try a little of everything and/or focus on their favorites. And our food overall (we ordered ordered japchae and bulgogi) was pleasantly tasty and priced reasonably.

We try our best to vary our cuisines on our longer road trips, and finding something that wasn't traditional "American" style eats isn't too easy smack dab in the Heartland of America. Seoul USA proved to be a nice little culinary diversion on our journey to Colorado, and it seemed to us that this eatery has established itself as a neighborhood destination for the residents of this Kansas town. 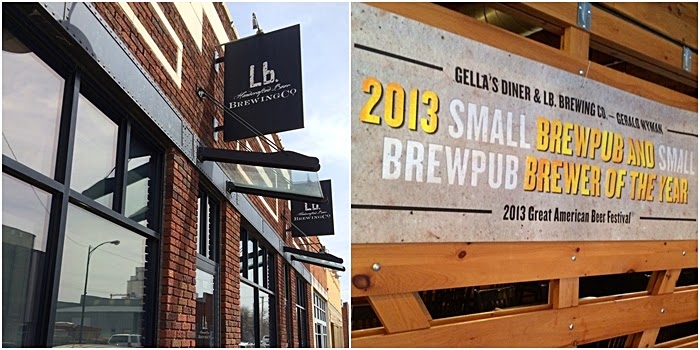 Hays, Kansas, has emerged from a wild west frontier existence (the Army established Fort Fletcher, later Fort Hays, nearby to help protect stage wagons on a nearby trail) and several notable natural and man-made disasters to become the largest town in the region with a population of around 20,000. Hays also qualifies as a college town - Fort Hays University, founded in 1902, boasts an enrollment of 11,000 students.

We have learned in our craft beer pursuits that a brewery need not be located in an area with a large populace, nor does it have to be a fancy setup (an impromptu tap system in an light industrial space serves as the tap room area for quite a few microbreweries.) We knew Gella's Diner and Lb Brewing was a slight step above that level, but we didn't realize how many steps they were above that level until we actually stopped in for lunch on our return to Ohio.

Gella's/Lb. Brewing sports a fairly substantial interior, falling fairly close in size to Dublin, Ohio's 101 Beer Kitchen or Columbus' expanded Wolfs Ridge Brewing. Their current brewery space, opened in 2005, is actually the conglomeration of four storefronts in the town's old Chestnut Street district, itself the focus of continued revitalization efforts. Painted murals, based on old historical photos and businesses in the area, and unique uses of implements like egg baskets as decor, add a nostalgic touch to the rustic-modern feel of the interior.

Of note also is their beer - a few Lb. (the Lb. is short for "liquid bread") Brewing's takes on traditional styles have won their share of medals at both the Great American Beer Fest and the World Beer Cup. My spouse decided to go that route with a pint of their 2013-GABF Gold Medal Winner American Hefeweisen; she detected some lager-like characteristics but found it to be quite enjoyable. No medal winners on my side of the ledger, but the Brownell Brown Ale was something I could drink on a daily basis, with a nice balance of hops and malts and a hint of chocolate.

Gella's/Lb. presents a fairly traditional pub/American-style menu for the diner, with perhaps a little more non-meat oriented offerings than typical and a nice half-and-half lunch special pairing up a half-a-sandwich with various sides for a good price. We decided to go with the standard issue Club Sandwich with Gella's potato chips and a Falafel Pita for our orders - they were nothing earth-shattering taste-wise but more than adequate in this little bastion of satisfying beer offerings on the northwest Kansas plains.