To The Moon and Back

While I was alive at the time, I proved too young to have any real memories of the first moon landing in July, 1969, when Neil Armstrong first planted his foot on Earth's nearest celestial neighbor on NASA's famed Apollo 11 mission. My first space-oriented memories are shunted a little later down the road, with the last moon landings in 1972, follwed by the Skylab and Apollo-Soyuz Joint Projects. The former created quite a hubbub when it crashed to earth near the end of the decade, while the latter proved to be an example of détente practiced between this country and its former Cold War adversary the former Soviet Union.

I also remember fondly the four astronaut figurines my parents acquired for me and my then three siblings during a long length-of-Florida family trip which included Cape Kennedy, Marineland, and the newly opened Disneyworld, among other destinations. As Marx Toy Company creations, they'd be somewhat valuable nowadays in mint condition, but we treated them as kids would treat them, making pretend moon landings and then, later, into the toy bin blender with teddy bears, Fisher-Price Little People sets, Tonka Trucks, and Hot Wheels and Matchbox cars, among other things.

They, along with the NASA missions themselves, did help stoke my interest in astronomy, with numerous trips to the library to check out a myriad of books, and further nurtured with the purchase of a reflecting telescope. We didn't necessarily know where to find the planets and specific stars, but we sure could find the moon. Little did I know they would help stoke a visit to Western Ohio numerous years later to visit the Neil Armstrong Air and Space Museum during the Apollo 11 50th Anniversary Commemoration.

Housed in Neil Armstrong's hometown of Wapakoneta, the Ohio Historical Society-operated museum opened to the public exactly three years after the momentous event. Interestingly, this was my spouse's first visit to the museum as well; she had driven by it numerous times with her parents, but never actually stopped by. As she joked to me, this trip would be either the best or the most insane planned first visit ever due to the expected crowds. 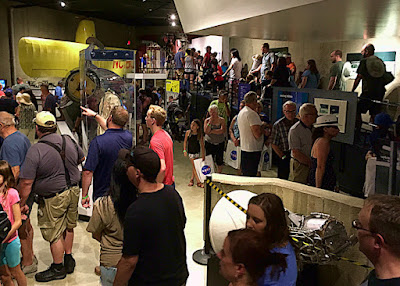 Unsurprisingly, this was the busiest day of a ten-day-long celebration hosted by the museum (one staff member commented this day was the busiest the museum had ever been.) On this day, a whole moon crater's worth of events proved at the ready, from the Run to the Moon 5K/1K/fun walk, to kid-friendly activities (bounce houses and slides, a COSI Science exhibit, and even a scary looking but quite popular multi-axis trainer), food trucks, space vehicle mock ups, guest speakers and former astronauts, and a big screen showing the national coverage of the commemoration via NASA TV. 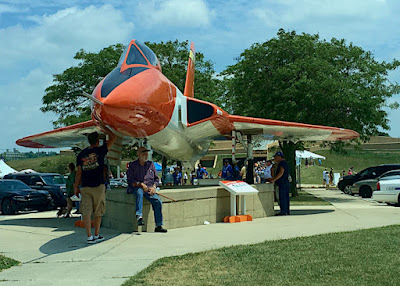 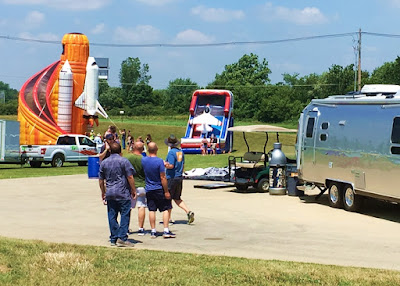 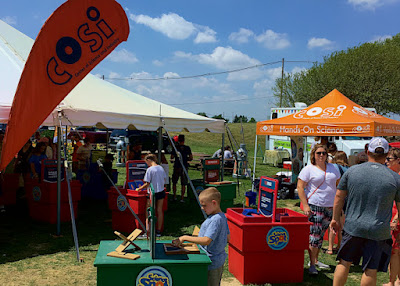 While the line into the museum was formidable, it moved steadily, thankfully sparing museum-goers a similar length of time that Armstrong himself needed to finally plant his foot on the lunar surface (nearly seven hours from the actual lunar module touchdown.) Naturally, the museum has a focus on Armstrong (the museum houses several of his personal effects and other important memorabilia such as a couple of his spacesuits and aircraft he once flew in) and how Ohio in general has supported the country's space program throughout the years. 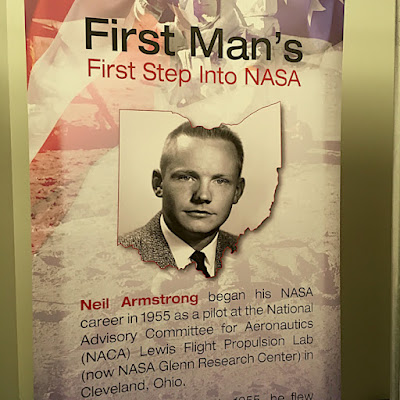 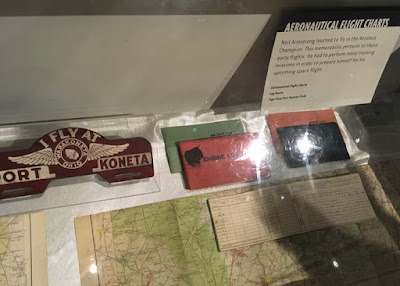 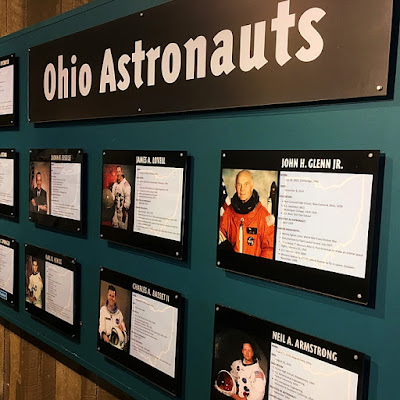 However, there are plenty of exhibits that scope out the history and timeline of the country's space exploration and its relation to the Soviet space program, as well as examples of equipment used during those times and an actual moon rock. The museum is also quite friendly to younger tykes, with numerous interactive, audio/visual, and simulator setups scattered throughout the facility. 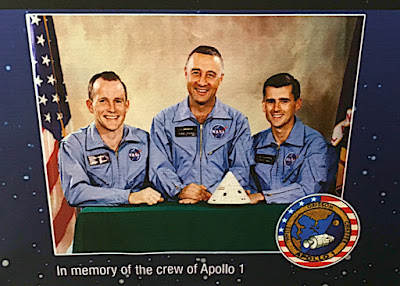 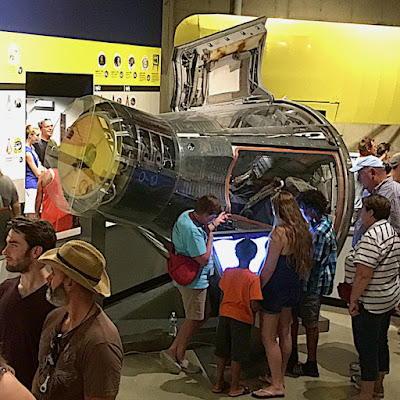 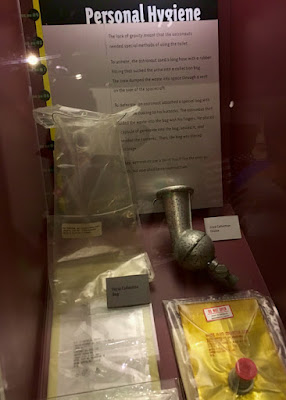 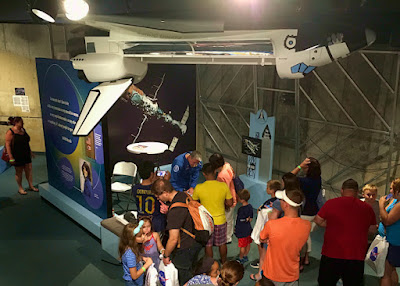 Perhaps the best thing is that on the average day, visitors can get through everything in about an hour to an hour-and-a-half, including a viewing of a 25-minute documentary movie on the Apollo 11 landing (on this day, there were simply too many visitors to run the movie on its regular schedule.)

As it turns out, the buzz, fanfare, and electricity generated by the gathered masses (we heard that some folks had come as far as Ukraine on this day) provided us with a memorable experience when all was said and done. If anything, this trip has us looking forward to a future visit, where the crowds are less and the museum can be enjoyed at a much more leisurely pace, maybe similar to Armstrong himself when he made his first moon stroll to the East Crater as part of his historic visit to Earth's nearest celestial neighbor.