A Skillet and a Paper, No More

The July 3rd edition of Columbus Alive marked a significant and increasingly unsurprising development in the publication's history. The newsprint version of this weekly, which has history dating at least to the 1990s and most likely into the 1980s (see below), will go the way of the dodo bird, with the publication going to a strictly online presence from here on out.

Normally, this mere transition would've been an "Oh, okay" moment for me, a mere blip that wouldn't have merited more than a brief mental acknowledgement.  However, a chance find at an estate sale a few weeks prior provided a golden opportunity for a blog post that I couldn't turn down.

Back in San Francisco and well before I had any sense of pursuing the culinary riches of the area, my typical Saturday morning destination was almost always Denny's, the ubiquitous diner chain that currently sports 1,700 locations around the country. One would (or should) never suggest that Denny's is fine, gourmet, or essential destination dining, but it was perfect as a twenty-something trying to payoff college debts living in a city not ever known as a culinary destination.

Armed with the Sunday San Francisco Chronicle from the convenience store down the block, I plopped my ass at the nearest Denny's right after their initial Saturday rush. For the next couple hours, it was a my paper, my booth, breakfast (typically one of their Grand Slam or Skillet options), and a large pop (it also came with a decent tip for the wait person who had to deal with my butt for those two hours.)

The Entertainment section, named the Pink Section (for the colored paper) would always be one of my first reads along with the sports and the comics. But as good and as detailed as the Pink Section was, I personally preferred the Entertainment section from the San Francisco Bay Guardian, the city's primary alternate newspaper at the time. However, that paper was almost always read during lunch times or other idle moments at my job I held in San Francisco during those years.

When I moved over to Columbus, Columbus Alive and The Other Paper were the two major published sources for figuring out this area's food and entertainment events. Because of its similarity to the Bay Guardian. I enjoyed The Other Paper quite a bit more. Interestingly, both papers went out of print not too long after my move, with The Other Paper ceasing existence after January 2013 and the Guardian October 2014 (the latter was partially revived in online daily news format as 48 Hills in 2016 and partially as an ongoing effort to preserve the newspaper's archives at SFBG.com). 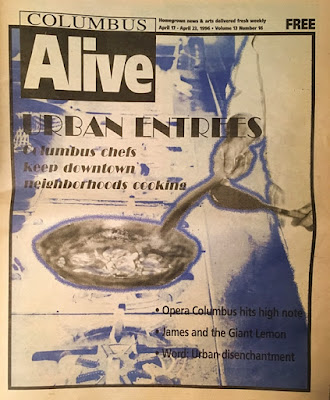 My chance find at an estate sale a few weeks back in a pile of random media publications showed me a side of the Columbus Alive publication I hadn't known existed before. Dated April 17-23, 1996 (Vol. 13, Number 16, which for me implies that Alive started back in the eighties), this Columbus Alive edition sported a headline that grabbed my food-conscious mind immediately: "Urban Entrees: Columbus Chefs Keep Downtown Neighborhoods Cooking." 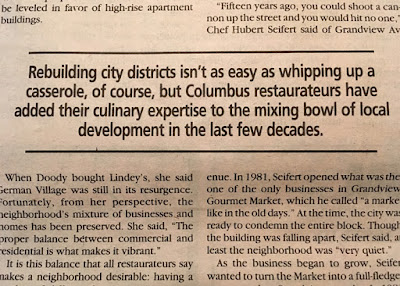 Written by Brian Lindamood, this In Focus section article shines a spotlight on restaurants that were at the time ahead of their time in terms of neighborhood locations. Familiar names dot the article, including Kent Rigsby (whose Rigsby's Cuisine Volatile and later Rigsby's Kitchen helped make the Short North a dining destination), Sue Doody (founder of German Village's Lindey's who sadly passed away from cancer April of 2018), Hubert Seifert (whose Gourmet Market, the forerunner of Spagio, was once the only food-oriented place in Grandview's Bank Block area) and Cameron Mitchell (whose Cap City Diner drew folks to a then isolated section of Olentangy River Road.)

More food insights can be found in the So Sue Me column, which references Chef Martin Yan's visit to the Fifth by Northwest located Trattoria Roma and an update on Ricky Barnes's progress on getting his Galaxy Pizza up and running (I myself got to experience his wares from his Explorer's Club in Merion Village, which opened up not too long before I moved to Ohio and proved to be one of me and my spouse's favorite brunch places during its three-and-a-half year run.)

This Columbus Alive edition sports other ties to modern day life - the Airball section relayed the city's enthusiasm for the Columbus Crew soccer team, one of the founding members of the newly minted Major League Soccer pro league. Enthusiasm for the team was high after a resounding 4-0 trouncing of D.C. United, but also guarded in relation to the viability of the league itself. As it turned out, the league has stayed more or less steady, but Columbus's team needed an intense grassroots effort to save it from owner Anthony Precourt and his desire to relocate the team to Austin, Texas.

Letters to the Editor relayed the controversy related to WCBE's "Kids Sundae" program, an award-winning variety show that seemed at the time of printing "down for the count" due to an inhospitable atmosphere between the show's volunteers and station management and possibly in part in anticipation of funding cutbacks from the Board of Education. Granted, more than 20 years have passed since this issue, but it's impossible not to relate that to the radio station's current troubles, where an audit stunningly uncovered that now-resigned General Manager Dan Mushalko had hidden the radio station's debt to NPR via falsified invoices,

Other interesting items dot this Alive issue, including:

Other differences are evident between these issues printed 23 years apart. The 1996 edition sports a robust personals section as well as a cornucopia of 1-900 phone numbers promising all sorts of carnal pleasures. The older edition has nowhere near a sleek look as its future counterpart and feels very much like the independent paper it once was (The Columbus Dispatch would acquire the paper a decade later in 2006.) The page size is also noticeably bigger; the trend to a smaller footprint is both evident in both later editions and especially with the Dispatch itself.

The online trend, with Columbus Alive and many other publications, has definitely had an environmental benefit, as far fewer trees are harvested these days to produce newsprint. But at least in the world of mixing brunching and reading, hoisting an iPad or mobile phone while chowing down the ham and egg special at the local diner doesn't quite have the same appeal.  I guess in the end, the bottom line is that Columbus Alive is still alive, and that's what really matters.
Posted by Joe