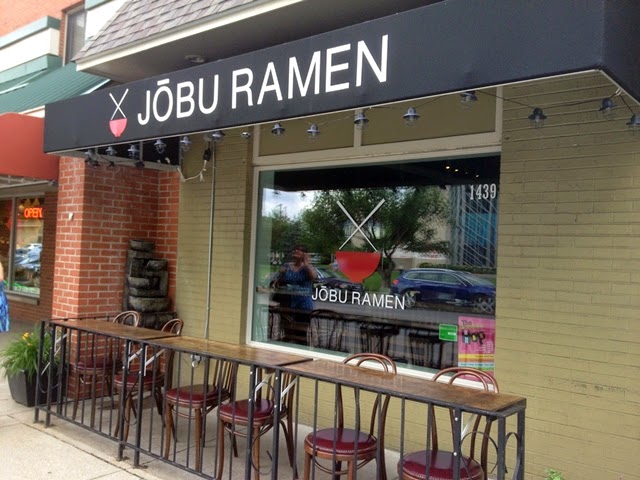 People in the know can tell you that Jobu is a reference to the movie Major League. Specifically, Jobu was the god of voodoo whom Cleveland Indians' slugger Pedro Cerrano constantly prayed to for help with everything, including that almost impossible task of hitting the curveball.

At Jobu Ramen, the still relatively new restaurant located in the Grandview Heights neighborhood of Columbus, you really won't find too much that resembles a curveball. The menu here is fairly concise, built around (what else) ramen and a few select related appetizers and entrees. 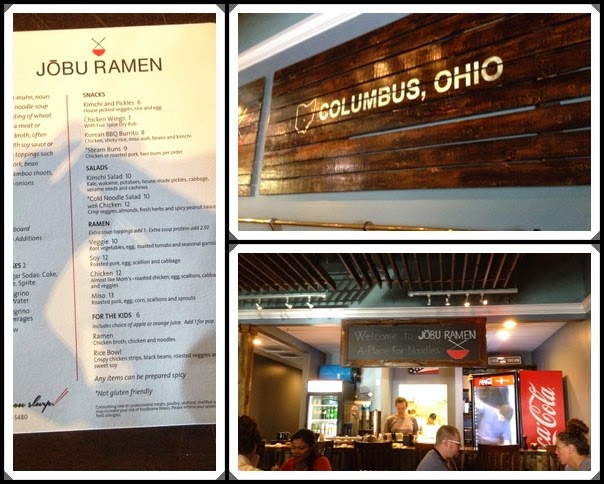 As someone who came from the Northern California Bay Area, it might be surprising to hear that I have had no real prior experience with traditional ramen (the cheapo, instant ramen you find in stores at four for a dollar, on the other hand...) Most of the best examples of this Japanese classic in the area were on the far opposite side of the bay for me. When  I was in a soup mood, I generally stuck with Chinese or Vietnamese takes on this standard. However, Mrs. 614orty-Niner and I are making it a long-term goal to get more acquainted with the dish and discover what makes one ramen standout over another.

The interior of Jobu is as concise as its menu: an intimate, dimly lighted space that might make you think you've stumbled into some back alley ramen joint somewhere in Tokyo itself, with a little bit of hipster vibe thrown in. Due to this limited space, I can imagine wait times could be an issue at busier times, though we have not experienced that issue yet.

As neophytes, we asked quite a few questions and our server proved up to the task in explaining their menu quite well. My spouse was bound and determined regardless to sample the ramen and went straight for the pork miso ($13.) On the other hand, I was not fully into a big bowl of soup, so I ordered some of the most intriguing items to me: the steam buns (two for $9, with one each of the chicken and pork) and the chicken wings with five spice rub (five for $7.) 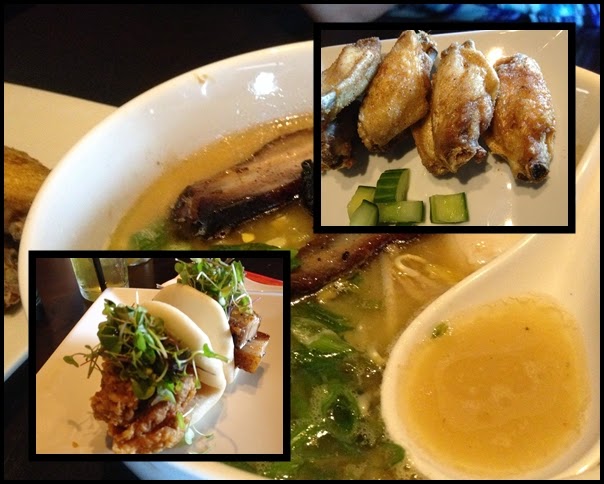 The steamed buns were served in novel manner, resembling a puffy street taco with slabs of chicken and pork belly underneath a big pile of microgreens. While we thought they were both excellent, the pork belly turned out to be our favorite with its lusciously fatty slabs of pork belly. The pork miso ramen also was a hit, as the same pork belly added a richness to the broth that proved satisfying despite our laughable attempts to gather the entire sensory experience via slurping.

The five-spice wings were decent fare, well-fried and juicy but probably something I'd only order in the future if I was in a wing mood.

My spouse got to return a second time (no, I'm not jealous) with a sibling in tow and gave her hearty approval for the Yakisoba (offered as a special for $10.)  The noodles were fried up well, and the mix of that with vegetables and pork made for a satisfying dinner.

With this being our first real ramen experience, we won't proclaim this the best ramen ever (though, by default, it is the best we have eaten.) What we can say with certainty is that has magnified our interest in this culinary staple, and that we personally have enjoyed our experiences here. We look forward to more visits both here and other area purveyors, perfecting our slurping techniques with every savory mouthful.

08/27/2015 - Update: Jobu Ramen was forced to close January of this year, but in its place, owner John Franke has successfully relaunched his Mashita Noodles pop-up ramen cart. For the latest updates on Mashita, please consult their Facebook page.