Pickers and Peanuts - A Venture into Vintage at the Peanut Shoppe

As the years have gone by, my spouse and I have gone quite a bit away from so-called "appointment television" routine. However, a few shows still make it into a semi-regular viewing rotation, including the History Channel's "American Pickers." For us, the combination of catching a glimpse into the history of a region or familiar brand product, plus the give-and-take between the hosts of the show (Mike Wolfe, Frank Fritz, and Danielle Colby Cushman) and those who collect the memorabilia, make this an appealing way to spend an hour or two per week.

On Monday's season's opening episode, the pair traveled to Springfield, Missouri, and visited Don Johnson, a man with a gigantic stash of collectibles (over four warehouses worth, according to this Springfield News-Leader article detailing the filming.) The climax of their pick involved a vintage 1920s-era peanut roaster featuring one of the most recognizable advertising mascots ever: Mr. Peanut of Planters Peanut fame. As the negotiation played out (Frank did eventually bite at $13,000, despite some alterations to the mechanism), it was implied that only twenty of these vintage machines were left in the whole country.

Of course, this exchange caught our attention immediately - as residents of this fair city, we had had several encounters with what seemed to be a similar machine at one of downtown's long time businesses, The Peanut Shoppe (detailed at this blogpost written earlier this year.)  I was curious to find out the truth, and I figured the best spot to go was straight to the source. 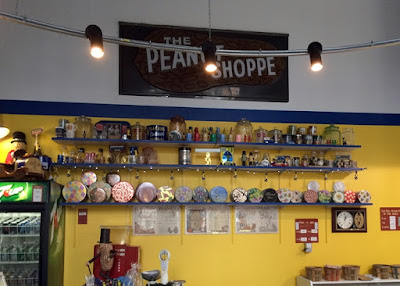 A first time visitor to the modest space that holds The Peanut Shoppe may not realize that this space is something of an upgrade from their previous location, just a block and a half north on High Street. Operating within the downtown area at various locations for 80 years now, The Peanut Shoppe's newest space helps the shop in more readily display some of the shop's collection of vintage Planters Peanuts gear (some of which, located in a glass case, is available for purchase.)

And if you are very lucky, your visit will be greeted by the whirring of vintage machinery.


I'm normally a pretty regular customer to the Peanut Shoppe to buy a bag of whatever nut or candy treat strikes my fancy, but on this day it was Mr. Peanut, perched happily on his roaster, which brought me in. Thankfully, Pat Stone, the co-owner of The Peanut Shoppe, was in at the time of my visit for me to bounce my tale off of.

"Oh, yeah, American Pickers. We've had a few come in to ask," she responded as I relayed my story. She verified that their roaster (which she called the Peanut Rider) was indeed the same machine, but had some of the mechanisms removed (namely the cane and crank that puts Mr. Peanut's arms into motion) due to interior space restraints.

Stone continued by detailing the history of the Peanut Shoppes themselves. At its peak, some 200 locations of these company-sponsored stores dotted the American landscape, but numerous factors slowly dropped the number of locations to a handful. Stone herself said besides Columbus, the closest cities which still sported these shops in Ohio included Akron and Springfield. 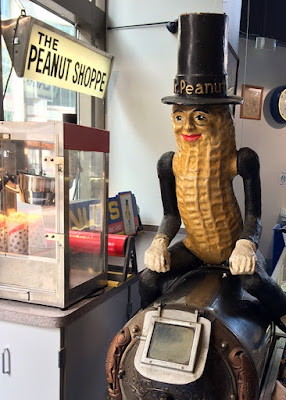 When asked about the number of these roasters in the whole country, Stone shook her head with a smile. "It's not quite that rare," she said, and proceeded to tell the intriguing tale of the Atlantic City store location. According to Stone, at least 20 of these machines were fashioned to spit out freshly roasted peanuts, which were then sent down for purchase by eager customers via conveyor belt. Stone did not have exact figures as to how many of these "Peanut Rider" roasters may be left, but my guess of somewhere slightly less than 100 sounded right to her.

She added a tidbit which might be of interest to amateur antique seekers out there - for the money, the more rarer and perhaps more desirable piece of Mr. Peanut memorabilia to nab may be the coin-operated scale, adding that one had sold at over $10,000 not too long ago (a casual check of Google showed a range of $10K to $20K at auction for this item.)

As I thanked her for her insights and was set to leave, Stone mentioned to me perhaps the most unique item that the Columbus version of The Peanut Shoppe owns. The neon-lighted Mr. Peanut Planters Peanuts sign, standing guard over the shop at the corner of High and State Streets is the only such sign in active operation in the entire country.  As much as I love seeing the Peanut Rider in action while grabbing a bag of treats from within, there's nothing like walking around the downtown in the evening, or perhaps even a foggy early morning, and viewing this sign in its red-tinged, glowing glory. 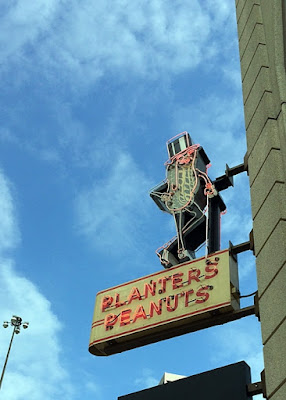