If you're keenly interested in food, the modern day calendar has transformed into a source of inspiration.  Every month, and increasingly, more weeks and individual days, have been dedicated to enjoying some sort of food or beverage, from the familiar (National Pancake Day, on February 16) to the novel (National Coffee Milkshake Day, on July 26.) Even newer food trends have their days, from National Keto Day on January 5 and World Plant Milk Day on August 22.
Unsurprisingly, these days have been used by those in the restaurant and food business around the world to help drive customers to them; local ice cream maker Jeni's Ice Cream encouraged everyone to break from tradition and eat one of their pints for "National Eat Ice Cream for Breakfast Day" a few weeks back on February 6.
With that in mind, we thought we would pick out a few days throughout the calendar year, and link them both to a song as well as a few local establishments where you can find the particular treat in mind.
January 15 - National Bagel Day: Columbus has plenty of places to grab this now-ubiquitous breakfast handheld, which has its origins to the Jewish areas of Poland.  Places range from national and state chains (Einstein Bros and Barry Bagels) to local purveyors (The Lox Bagel Shop on the more recent side and old-timer Block's Bagels), but we chose Sammy's New York Bagels, a staple in a number of local cafes and a godsend during pandemic because of their home delivery service. Music-wise, we start off nice and smooth with Köln-based artist DJ Soundtrax's "One Bagel Love" from his appropriately named album "Bagels." 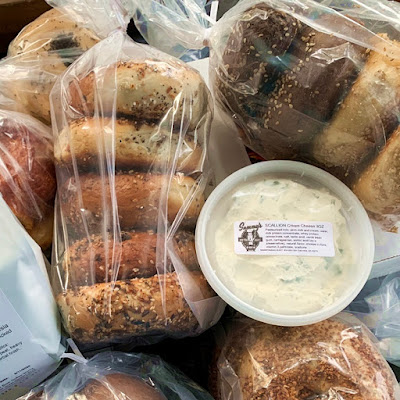 February 21 - National Sticky Bun Day: much like the Cinnamon Roll, you'll find these sweet treats all over the place: notable ones cover the range from the old-school places like Resch's and The Original Goodie Shop in Upper Arlington, to fancier renditions from places like Worthington's The Whitney House and the German-Village located Skillet.  Here we enthusiastically feature our favorite Vegan one in the bunch in Clintonville's Pattycake Bakery, and pair that up with the energetic "Sticky Buns" from David Maxwell, a longtime sideman in Boston's blues scene who started heading up his own band in the 1990s. 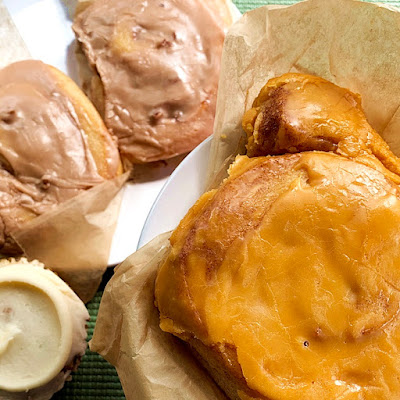 March 9 - National Meatball Sub Day: similar to pizza, you might get as many opinions on who's got the best meatballs in the Columbus area.  We certainly have not had all of them, but we can vouch for the open-faced Meatball Sub Sandwich from Pizza House in the Salem Village neighborhood.  Our song we chose to represent this date is even older than this restaurant: the World War II-era "One Meatball", a duet with The Andrews Sisters and Bing Crosby. 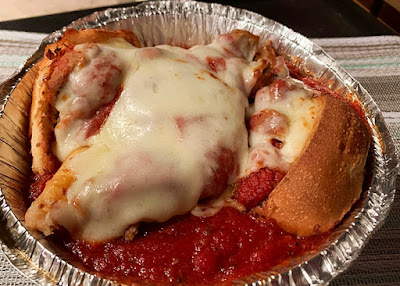 April 5 - National Deep Dish Pizza Day: while Columbus does have a Chicago-based representative in town serving this Windy City treat (Giordano's), the local pizza scene has had its own purveyors in Meister's Bar, Massey's, and Ange's in Hilliard. Perhaps the most revered of the bunch is the version from Olde Towne East's Yellow Brick Pizza - their version is a very close copy of the one the former Tristano's in Grove City pumped out to diners on a regular basis. Unsurprisingly, we call on one of the most ubiquitous yellow brick songs in Elton John's "Goodbye Yellow Brick Road", off the smash 1973 album of the same name. 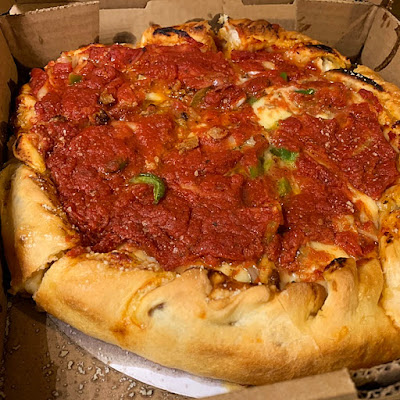 May 13 - International Hummus Day: We've encountered a number of notable hummus dips during our eating here, from Pita Hut n Grille to Mazah Mediterranean to Yemeni Restaurant and more. But our favorite of them all still remains the version Lavash Cafe in Clintonville has for your dining pleasure. The Nashville-based Hummus For Days provides the musical pita for dipping here, with a cover of the Arlo Guthrie version of "Saint James Infirmary", a song which actually dates back to the days of Louie Armstrong. 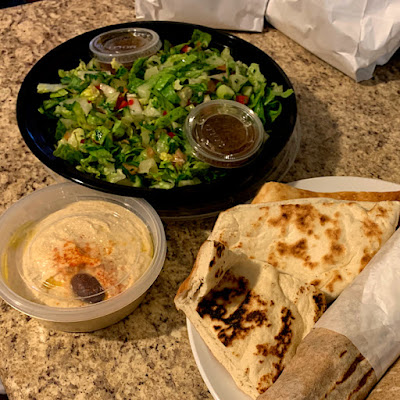 May 28 - National Hamburger Day: Yes, Shake Shack has proven popular since their arrival here in Columbus, but that has hardly dented the love for this American staple in this town with both the chain and local purveyors.  Our local go-to remains Prestons' Burgers, which as a result of and despite the chaos of pandemic moved into a slot at the North Market. Kool & The Gang provides the side of fries here with their rendition of "Raw Hamburger", off their 1970 debut album gives just a hint of what would emerge with their later 1970s hard funk jams like "Jungle Boogie", "Hollywood Swinging" and "Ladies Night." 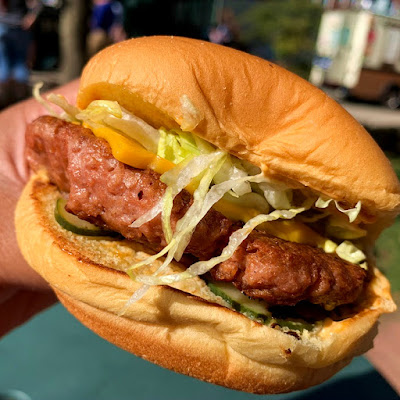 June 14 - National Bourbon Day: Columbus has seen a number of distilleries pop onto the scene in the past few years, but it's only the two O.G.'s of the scene in Middle West and Watershed as well as Gahanna's Noble Cut that has a local bourbon for sampling. With that in mind, it seemed like a great opportunity to feature another local in Watershed (the band), whose "Laundromat" is off their terrific and somewhat overlooked 2005 "Fifth of July" album and is still cranking out great music even now. July 18 - National Ice Cream Day: Everyone knows the big names here (Jeni's, Graeters and Handel's), and other locals like Johnson's, Diamonds, CRMD and Dulce Vida have earned their devoted followings.  But here we go to the Smoky Row area of town for Mardi Gras, who has been pumping both traditional and Indian-inspired ice cream flavors (it's hard picking a favorite) for two decades. We don't know if it was ice cream which helped Antoine "Fats" Domino with his girth, but it sure didn't hinder his talent, as in his rendition of the Professor Longhair tune "Mardi Gras in New Orleans." 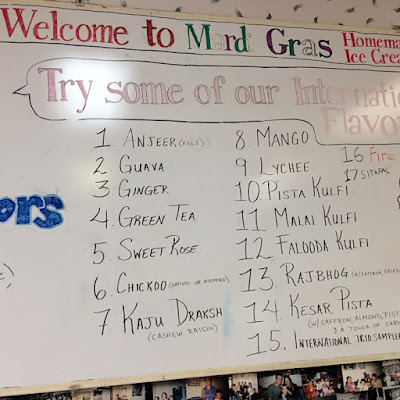 August 6 - International Beer Day: Despite the challenges of pandemic, the area's breweries have soldiered on, using things like canning and home shipment to keep enough money flowing until times return to something similar to pre-pandemic days; we ourselves have received shipped beer from Powell's Nocterra Brewing, Granville's Three Tigers, and Dayton's Branch & Bone. One brewery near and dear to us is Clintonville's Lineage Brewing, a spot that was a favorite destination for a post-work-night beer and hanging out. Grammy-nominated and Houston-based FKAJazz (aka Samir Zarif) provides us the music accompaniment with "Unfurled World", off his 2020-released "Lineage" album. 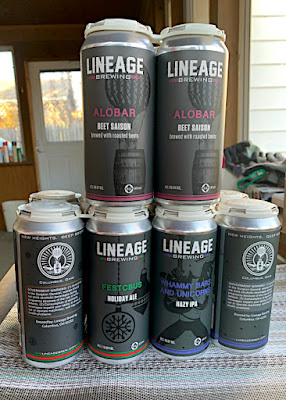 August 24 - National Waffle Day: Before the biscuit and birria craze, waffles (often paired up with fried chicken) were the rage in the city, and frankly it really hasn't stopped, with places like What The Waffle, Dublin's Hen Quarter, and Upper Arlington's South of Lane being just a few of the many places offering their takes on this combo.  But perhaps the most unique is the Ube-laced rendition that 5xNW's Bonifacio puts together for their modern Filipino take. Nu-Metal and Atlanta-based Sevendust adds the syrup to our dish here with "Waffle", a track from their second album "Home" and featuring members of The Deftones as guest vocalists. 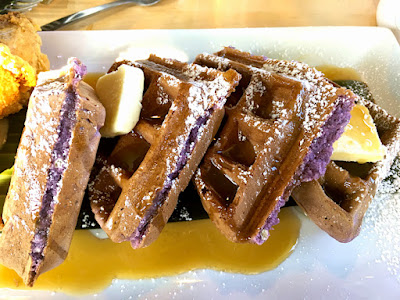 September 26 - National Dumpling Day: Dumplings, whether it's at a Chinese place like Xi Xia or Jiu Thai, or Nepali/Tibetan (the momos of Momo Ghar or Worthington's Everest Cuisine), is as favorite a side order as any for us in general.  Along with the Spicy Cauliflower, dumplings are a must at the Sichuan-oriented Helen's Asian Kitchen on the Northside.  Dipping sauce here is provided by the rather unique Moonpools & Caterpillars, a Glendale, CA-based Filipino-American alt-rock band who pumped out three albums during the 1990s, including "Lucky Dumpling" the album from which the track "Ren" is from. 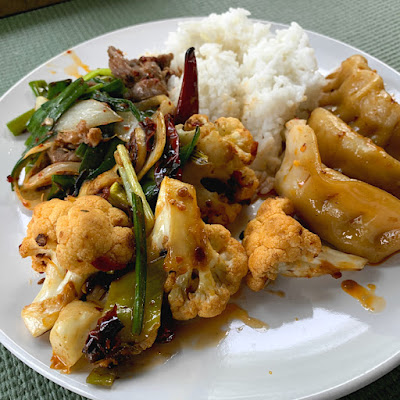 October 4 - National Taco Day: We use this day for a truism that so far hasn't failed us yet - we have never had a bad taco from a legit taco truck.  We've had many great tacos from the area's trucks, and the birria craze has got our mouths watering, but the Al Pastor Tacos (the glorious trompo from their original food truck is pictured below) from Los Guachos still reign supreme in our mind.  Founded in 2007, the Seattle-based Tacocat has been pumping out a decidedly feminist-leaning punk-oriented sound on their four albums, but definitely channels a bit of R.E.M. on their "Night Swimming" track, though in this case, the band from Athens is not on the playlist ("There's no one else in sight/Just all our friends/You can bring a boom box/But you can't play R.E.M.") 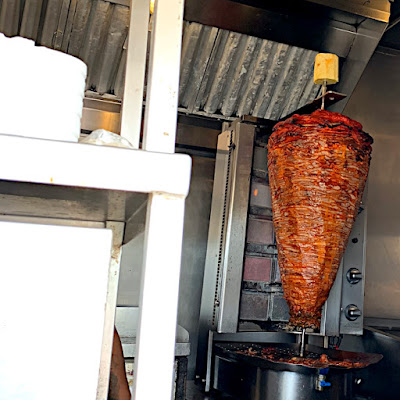 November 26 - National Cake Day: We admit, we're more pie people than cake people, but in our opinion, it's hard to beat the Carrot Cake that Clintonville's Mozart's Cafe bakes (in fact, we had it for our wedding reception in the Hocking Hills.)  If the Sacramento-based band Cake were a cake, they just might be a Kek Lapis - the band features country, folk, rock, funk and various world styles in a multi-colored and -layered song pastiche, including "Short Skirt, Long Jacket" from their 2001 release "Comfort Eagle." 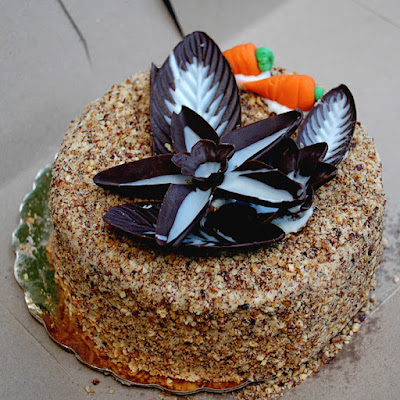 December 20 - National Sangria Day: When you think Sangria, you think Spanish tapas, and first and foremost you think of German Village's Barcelona for this particularly enticing combo around Columbus.  Finishing us off music wise is the irreplaceable Freddie Mercury of Queen, whose "How Could I Go On" was but one of his vocal contributions to "Barcelona", a number of songs in collaboration with opera singer Montserrat Caballé inspired by the city's awarding of the Summer Olympic Games of 1992. The revised version picked here features symphonic instrumentation as opposed to the original synthesizer and percussion on the original 1988 release. 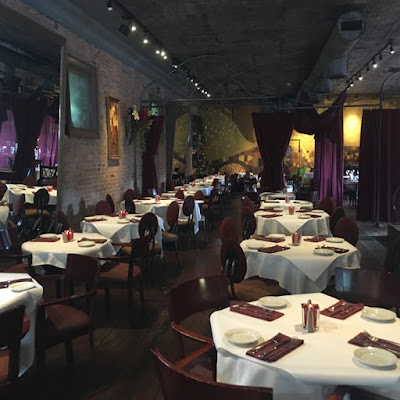