This also led my wife and I to think: despite our decided lack of stomach capacity these days, would it be possible to construct a Columbus-based glutton circuit that we could actually complete, with well-timed assistance from both hungry friends and exercise breaks?  Not only that, could we construct a circuit that contained a little of everything that makes Columbus's food scene distinct, and actually was realistic in terms of restaurant opening/closing times?

(Interestingly, Columbus Alive posted a similar but not quite similarly-inspired Columbus restaurant excursion entitled "The 24 in 24 Columbus Eating Challenge" the day before this post - Scott Woods' jaunt was quite enjoyable as well, so I encourage you to read it and compare notes)

Well, let's fast-forward to a future Friday morning around in the Discovery District, on a day which promises clear skies but not too warm temperatures.

7:00 AM We walk in eagerly inside the flagship location of 1) Roosevelt Coffeehouse on Long Street, opened up by Kenny Sipes with noble intentions (sale proceeds go to various social justice causes.) Seasonal drink options and tasty baked treats from places like Sammy's Bagels and Destination Donuts all have their appeal, but we're all about the pacing today. A good stiff espresso shots pulled from Roosevelt's house coffee beans gets us off on the proverbial right foot. 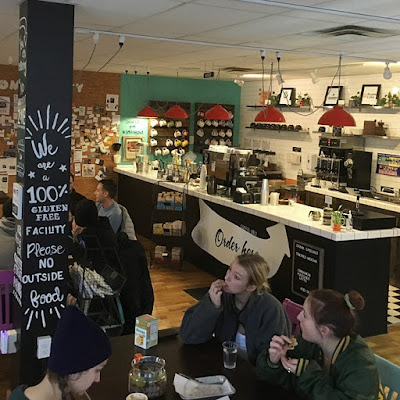 7:25 AM - We drive south down to Merion Village and arrive at 2) Bake Me Happy, one of the best bakeries in town, gluten-free or otherwise - it is really no surprise why the bakery started by Wendy Miller Pugh and Letha Pugh has become destination worthy. It's hard to go wrong with any of their baked goods, but their takes on childhood treats are a must, and their light and airy Spongies are perfect for this day's eating.

7:45 AM - Still feeling energized, we roll back north a bit to German Village to the uber-popular 3) Fox in the Snow, which like Roosevelt has expanded to multiple locations around the city. Like Bake Me Happy, you can't go wrong with any of the bakery goods here, but the Soufleed Egg Sandwich is perhaps their most special creation, helping them earn national recognition as one of the best coffee shops in the nation. It's too good to pass up, taking the early position as the most hearty meal of this quest so far. 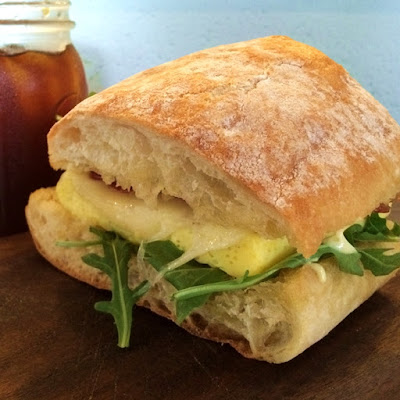 8:15 AM - Our next stop lies conveniently a virtual hop, skip and a jump away in 4) Native Cold Pressed.  Operating for six years now, Native Cold Pressed has provided residents with their fresh and healthful juices, smoothies and bowls - their Restore and Recharge Shots, with ingredients like red Hawaiian turmeric, ginger, wheatgrass and orange, are welcome boosts for our first physical activity of the day.

8:30 AM - We drive into downtown and park alongside The Scioto Mile. The 2010s proved pivotal in restoring the Scioto River through the downtown area back to its natural state. In the process, land was restored and transformed into greenways and bicycle/pedestrian paths.  This stretch is now as photogenic an area as Columbus has these days, a perfect place for crowds to gather for a huge community festival, or a couple out for a casual stroll, like we are this day. 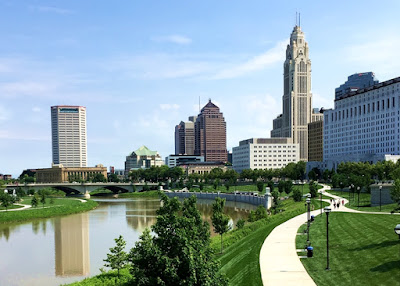 9:30 AM - A quick jaunt westward on Broad Street brings us into Franklinton to 5) Bottoms Up Coffee, a coffee shop with a unique outside mural (an iconic photo depicting the area's 1913 floods) and a social justice focus (diapers for under-served communities.) As much as we normally might be tempted by their empanadas or their very-Instagrammable Rainy Day Coffee (where a ball of cotton candy melts slowly into your hot coffee), we opt for their delicious cortados.

10:00 AM - Operating for more than thirty years, 6) Tommy's Diner, with its classically styled interior and American favorites menu, has emerged as an culinary anchor for the Franklinton area.  Their Cinnamon Roll is on the larger side for this day, but its deliciousness wins out for us. 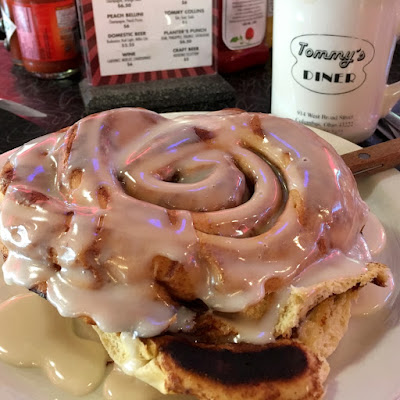 11:00 AM - We meet up with a couple friends at The North Market, one of the area's prime food destinations hosting a number of food-related vendors and stalls covering the gamut. The Market, which has resided at its current home since 1995 but has origins dating back to the 19th century, is also on the pathway of growth, with its current home set to be redeveloped into a 28-story tower and a second location underway at Dublin's Bridge Park.  After some debate, we each decide to grab one part of our four-part meal:

A Four-Scoop from 7) Little Eater - Cara Mangini's stall in the North Market might be seen as a trailblazer of sorts, pre-dating the current wave of area vegan and plant-forward eateries by a few years.  Her scoops, inspired combinations of seasonal vegetables and dressings, turn the traditional salad on its head and provides us some healthful balance to our meal. 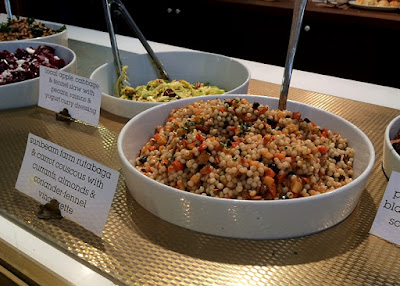 A Hot-level Drumstick Meal from 8) Hot Chicken Takeover - Joe DeLoss's combo of Hot Nashville-style Chicken and social mission (acting as a second-chance employer to formerly incarcerated individuals) has grown exponentially since its April 2014 pop-up kitchen origins, expanding past the metro boundaries into Cleveland.  Of course, our meal comes with the tasty Ma's Mac N Cheese and Slaw, as well as free Ice Tea (both sweet or unsweet) and their tasty housemade Ranch Dressing

Cabbage Rolls from 9) Hubert's Polish Kitchen - Polish cuisine is something of a rare commodity around the Columbus area, but Hubert's has been holding down the fort in this area for over a decade, originally opening up under Hania’s Old World Cuisine in the North Market in 2009. Pierogi, Bigos, and Kielbasa are among the staples sold here, but my spouse always defaults to their Cabbage Rolls. 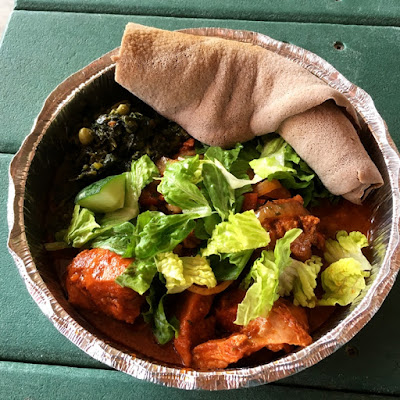 Suqaar from 10) Hoyo's Kitchen - the Somali-oriented Hoyo's Kitchen is perhaps the most well-known of Columbus's restaurants specializing in African-based cuisines, and their Suqaar (with either Beef or Chicken) paired up with Injera is a worthy introduction to this area's still largely under-the-radar culinary treasure trove

11:45 AM - Nicely full from our meals, we decide to wander a bit on foot. First, we stroll over to the Greater Columbus Convention Center to people-watch and see if the "As We Are" interactive sculpture is up and running, and then we skip up Goodale Avenue to put in a few steps around the park of the same name. The combo of the building warmth of the day as well as the sight of the park's signature fountain makes me think of much cooler days for a brief moment or two... 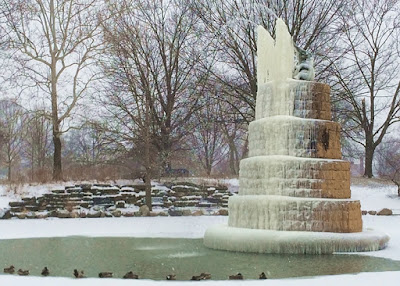 12:45 PM - Not too far from Goodale Park, we slip a little farther north into Victorian Village to one of the very first food-oriented places I ever visited in Columbus in the 11) Las Maravillas Market. Their food truck outside is one of a substantial number of traditional taco trucks in the metro area, and we grab a couple of chorizo tacos to quickly chow down on.

(Hopefully you're thinking of your own personal day of gluttony as you're reading this, and stay tuned for Part 2 of our own particular Columbus Day of Gluttony on my next blogpost, ya' hear?)
Posted by Joe