Way before San Jose, California, transformed into the anchor of what eventually became known as Silicon Valley, I had two personal mental associations with the city. One was the Dionne Warwick song "Do You Know The Way to San Jose", one of the first songs I remember listening to and liking immensely.

The other association was The Winchester Mystery House, which I always perceived as something of a cheesy attraction, based on both the promo ads I heard and read as well as the story (essentially, superstitious rich widow, in this case, Sarah Winchester, takes fortune teller’s crazy story to heart and builds a likewise crazy house to match in the quest for immortality.)

However, as we were happy to find out on our first visit ever, the tale behind The Winchester House is far more nuanced than that, with aspects about Winchester herself as well as the house she ended up building wouldn’t realize upon first glance. 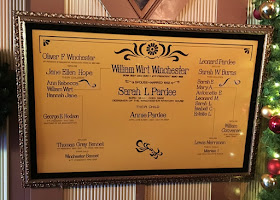 As most visitors to the house do, we started with the main Mansion Tour, which covers the basics behind the house’s namesake occupant as well as the house itself. Boiled down, the Winchester House relates to Sarah Winchester (nee Pardee), a woman who was both intelligent (she was fluent in numerous languages and was fond of classic literature) and a talented musician. Both the Pardee and Winchester family traveled much of the same social circles in New Haven, CT, so it wasn't a complete surprise when Sarah married the head of the Winchester family, William Wirt, in 1866.

The Winchester name gained immense fame and fortune through their line of rifles, which became the weapon of choice for many European settlers moving to parts west. One model, the Winchester 1873 Repeater, was marketed by the company as "The Gun That Won The West."

When Sarah's husband passed away from tuberculosis in 1881, she turned out to be the sole heir to what would be the equivalent of 500 million dollars today as well as half of the existing company. However, it was his death, coupled with the unusual death of their only child (from Marasmus, a childhood malady which made it impossible to metabolize certain vital proteins) that, as the story goes, left Winchester distraught and led her to seek out answers for her misfortune.

As the tale relayed by our tour guide continues, a meeting with a Boston-area medium led her to believe that the Winchesters were cursed by the spirits of those killed by the company's weapons, and that a move out to California to build a house to ward off those spirits was needed. Furthermore, construction on the house must never stop in order to appease those spirits.

The skeptic might say the story sounds too crazy to be real, but as we discovered, the often non-sensical layout of the house does nothing to dispel the legend.  Doors that open into walls and stairways that go nowhere were common, as well as more unusual features like pantry doors built into the floor and, perhaps most strikingly, the third floor door (the so-called "Door To Nowhere") that leads directly outdoors.  As our tour guide explained, Winchester believed the maze-like layout would keep any malevolent spirits from tracking her down (and for what its worth, both our tour guides this day claimed to have personally encountered spirits during their time at the house.) 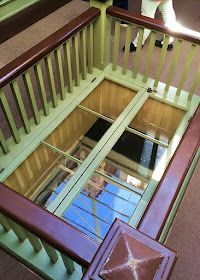 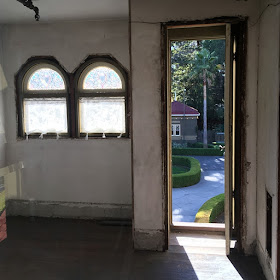 Our tour also included a visit to Winchester's seance room, used regularly to commune with benevolent spirits. The room, which technically had only one entrance point but three exits, was used by Ms. Winchester regularly at 12 midnight every night until she passed away in her sleep in 1922. 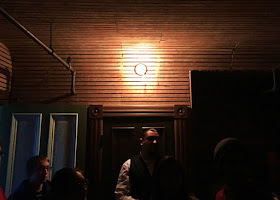 Other unique touches, both superstitious and otherwise, provided more insight into Winchester’s ways. While the numbers 7 and 11 also played parts in the home's construction, it was the number 13, a number she believed to be lucky for her, that was integrated into everything from wall panels to stained glass windows to drain covers.  Other motifs were commonplace, most prominently spider webs. 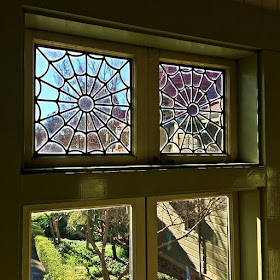 Easy-rise stairs (due to her arthritis) were commonplace throughout the house (one stairway, called the 7-11 stairway, was 7 regular stairs on one side and 11 low-rise stairs on the other) as well as low clearance passageways (Winchester stood well under five feet height-wise.) Also notable were the number of false bathrooms, which, according to our guide, were to prevent malevolent spirits from cornering Ms. Winchester into an inescapable room. 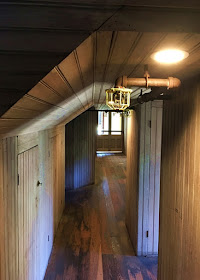 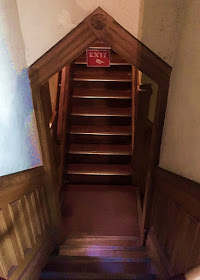 Being someone that was quite well-to-do, Winchester had a penchant for fine art and materials, using redwood in much of her house as well as having a beautiful array of stained glass windows. All told, the house features over 10,000 panels of glass, interestingly with the most fabulous of them (which no longer receives any any natural light anymore due to the continued house construction) located directly next to the cheapest. 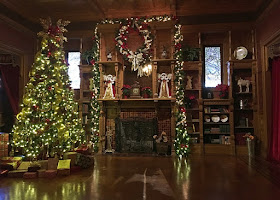 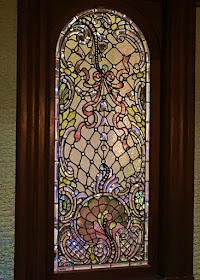 The recently implemented “Explore More” tour provides some added views of the house previously unavailable to the public, including a view of the basement (supposedly haunted by one of the longtime construction workers), a chance to go into a rather frightening looking 1890’s era elevator, and rooms damaged by and more or less left untouched since the Great 1906 Earthquake. 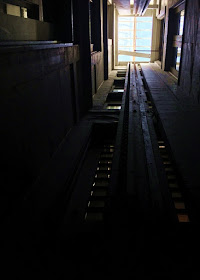 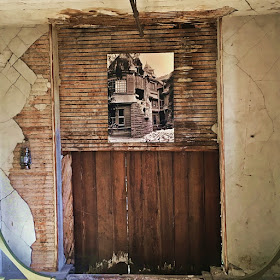 At that time, the house stood at seven stories. Winchester reportedly took the quake as a sign that spirits were angry with the way she had built the mansion. While the upper three levels were being razed due to the severe damage, the heiress temporarily relocated to a completely normal abode in Atherton twenty miles due northwest before moving back. As for the damaged lower levels, Winchester decided to simply close them off to to general access and directed her construction workers to build the mansion towards the rear.

This tour also gave us some new angles on some of the sights seen on the basic tour, including the most fabulous stained glass window as well as the so-called Door to Nowhere. We also got to venture upstairs to grab a look inside the Witch's Cap (which featured a unique audio effect if you stood directly in the center of the room), the staff's living quarters, and a focus on Winchester's preferred and recurrent design elements.

And while Winchester was not formally trained as an architect or engineer, she did put in some unique innovations such as wall insulation, modern-for-its-day lighting apparatuses, and fire fighting stations built in at various areas of the house (unusual for a residential building, but completely understandable considering the maze-like nature of the house interior.) 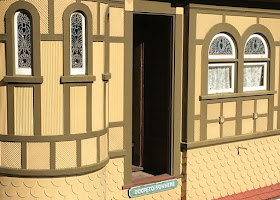 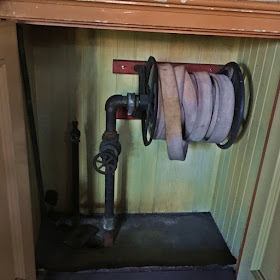 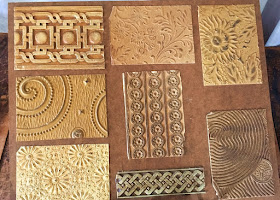 On both tours, other aspects of Winchester’s life were touched on, including her relationship to her staff and construction workers (generally speaking, they stayed loyal to her despite her quirks due to her generous benefits and treatment) as well as her charity with her surrounding community, both in San Jose and her former home of New Haven (where she set up the endowment for The Winchester Chest Hospital at Yale University.)

Whether you believe the legend fully or not, a visit to the Winchester House is almost certainly worth the admission.  For us, it might be the most fun and mystifying mansion tour we’ve encountered, and a definite for those who lean toward the quirky. Of course, quirky is but one layer to this story: if Sarah were alive today, I bet she would claim her tale consisted of 13 distinct layers.